Mount Taranaki: Most Instagrammed Place In The World 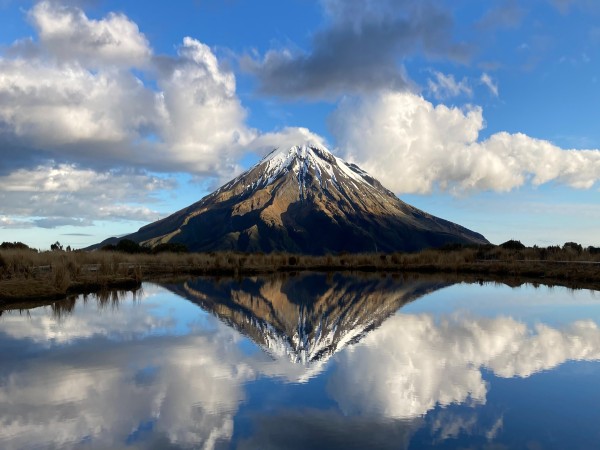 Rising like an island from a sea of pastureland. Mount Taranaki or Mount Egmont often seems like a mirage - sometimes there, sometimes not. On the southwest coast of New Zealand's North Island, mist and clouds often hide the mountain completely.

But in clear weather, the mountain's dignified peak pierces the skyline, and its great bulk is visible from afar. From the snowscapes of its 8183ft (2494m) summit, the mountain offers dazzling scenery and breathtaking views.

But a volcano's violence can nurture as well as destroy. Farmers working in its shadow can think of the volcanic ash for the fertile soil that, along with high rainfall, gives Mount Taranaki or Mount Egmont's slopes a profuse plant and insect life. Some species are unknown elsewhere, for in its isolation distinct varieties have developed here including two kinds of mountain daisy, a unique fern and two rare moths.

When you enter the maze of vegetation covering the lower slopes up to about 3000ft (900m) you are lost in a rainforest where rimu trees nearly 30 times a man's height reach for the sunlight. Rata trees, which also vie for the light, start life on rimu branches clinging like vines. They do not feed on rimu sap but send their roots down to the ground for sustenance. In time the rata may rob the rimu of light. But rimu and rata are both gradually disappearing and kamahi trees are spreading.

Shorter, tougher trees take over higher up the mountain - some of the Kaikawaka (mountain cedars) are 400-year-old survivors of the 1665 eruption. Above about 3500ft (1070m) there is dense, head-high leatherwood scrub. Beyond, alpine flowers light up the crags and screes. Finally, at the summit, there is nothing but mosses and lichens.

For centuries only Maori set foot on the mountain. Its river valleys gave them red ochre to mix with shark oil for body paint. Its caves were tombs of dead chiefs. When the Dutch navigator Abel Tasman sailed by in 1642, it must have been a cloudy day, for he made no mention of the mountain. Not until the evening of January 10, 1770, was mount Taranaki or Mount Egmont revealed to European eyes - those of the British explorer Captain James Cook, who named it Mount Egmont after a former First Lord of the Admiralty.

In 1839 Maori guides led two men - Dr Ernst Dieffenbach, a german naturalist, and James Heberly, an English whaler - on the first European expedition to the summit. They were following in the footsteps of Tahurangi, a Maori chief said to have climbed to the top centuries earlier. The wispy cloud often seen swirling around the summit is said to be smoke from his fire. Because of the belief that spirits and mythical reptiles stalked these lofty heights, the Maori guides would not venture beyond the snow line. The two Europeans scrambled alone to the top.

Today, about 150 years later, Mount Taranaki or Mount Egmont is the country's most-climbed peak. At least 200,000people visit it every year, many taking the well-trodden path to the top. All land within a radius of just under 6 miles (10km) from the summit has been protected since 1881. The boundary is easy to see - trees inside and fields outside.

Mount Taranaki or Mount Egmont is the last stronghold of the forests that once covered this region. Like its greenery, the mountain remains untamed. Its sudden changes of mood can catch visitors unawares - when the wind whips up from nowhere or mist drops without warning. And the volcano is dormant, not extinct. At any moment Taranaki could wake up.