Most-Visited Heritage Structures Of India In 2017 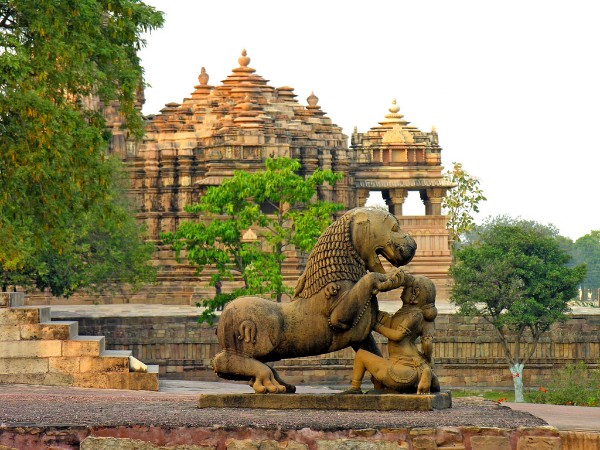 With a history dating back to nearly 5000 years or even more, the present day India is filled with various structures which are considered as heritage sites.

India is a wealthy treasure trove of culture, art, tradition, music, architecture, philosophy and mysticism which has been attracting travellers, scholars and history buffs from across the globe since a very long time.

One can relish the experience of exploring the country's ancient relics and architectural ruins which stand out in the middle of congested cities, streets and roads. India is a land of huge contrast where tradition and modernity mingle. The heritage structures of India are cherished even today due to their historical significance. Let us explore some of the most-visited heritage structures of India.

Considered as a Poetry in Marble by many, the Taj Mahal is the mausoleum of Mumtaz Mahal, who was Shah Jahan's most loved queen.

Over a period of 21 years by employing about 20,000 artisans, this magnificent monument was constructed on the banks of the river Yamuna in Agra.

The structure stands on an elevated platform and showcases intricate detailing which are engraved on its walls. The Taj continues to fascinate both historians and archaeologists for its complex geometrical patterns and its detailing which speaks volumes about the skills of the artisans.

Satisfy your desire of exploring ancient ruins by exploring the grand group of monuments found at Hampi. The ruins here comprise of temples and palaces which date back to the 14th and 16th centuries.

Declared as a UNESCO World Heritage Site in 1986, the place continues to attract a large number of visitors not only for historical values and grand architectural marvels but also for its laid back environment.

Heritage holidays in the country are never complete without exploring the country's oldest Buddhist sanctuary, which was a major Buddhist centre during the 12th century AD.

The site comprises of several structures of the Buddhist legends such as monolithic pillars, monasteries, palaces and temples with most of them being built between the 1st and 2nd centuries AD.The most well known monument here is the massive dome or Stupa which was constructed by Emperor Ashoka.

Snugged in the Sahyadri ranges of Aurangabad are the mesmerizing caves of Ajanta and Ellora which date back to the 2nd century BC. The caves are considered as one of the fine examples of ancient architecture in the country which were chiselled out by skilled artisans with their hands.

Originally there were 85 structures, out of which only 22 have managed to survive the test of time; in most monuments here sand stones of various colours were used for its construction. The sheer beauty and the architecture of these monuments have got the tag of World Heritage Site by UNESCO.

Well known across the globe for its rock carvings and monolithic sculptures, the World Heritage Site at Mahabalipuram was a port of the Pallava Empire in the 7th century and showcases the creativity and intense craftsmanship undergone to construct them.

The monuments here are carved out of local granite and are divided into four categories, rock cut caves, temples, bas reliefs and the rathas or monolithic temples.

Located on the shore of the Bay of Bengal, embracing the rays of the shimmering sun, the temple at Konark is a representation of the Sun God's Chariot.

The structure has 24 wheels which are filled with beautiful designs and drawn by six horses. Built in the 13th century, the temple is one amongst the most well known temples in the country which showcase the grace, joy and rhythm of the Kalinga way of life.

Constructed of yellow sandstones, the Jaisalmer fort was built by Raja Jaiswal atop the Trikuta hill in the 12th century. Exploring the fort would get you acquainted with various aspects of its gracious heritage; the structure is considered as the epitome of Indian artwork and military distinction. Set at the middle of the Great Thar Desert, a visit to the Jaisalmer Fort would remain in your minds for a long time.

Yet another feather in the hat of India's rich heritage, the Mughal architecture at Fatehpur Sikri lures thousands of visitors every year.

This monument was constructed by Akbar as a tribute to a Sufi saint and is located 26 km away from the city of Agra. The architecture of the monuments here showcase the Indo-Muslim style of design and highlight the fusion of both cultures.

Built in the year 1192 to mark the beginning of Islamic rule in the country, Qutub Minar stands at a height of 73 m and is a victory tower whose construction was commenced by Qutub ud din Aibak after his victory over the last Hindu Kingdom in Delhi.

The tower is constructed of distinct storeys with each having a projecting balcony; the diameter of the storeys decrease gradually when measured from top to bottom.

An interesting fact is that one would come across an inscription over the eastern gate which explains how the structure was constructed from the materials collected after destroying 27 Hindu temples.

Comments
Read more about: travel india monuments flashback 2017 heritage sites hampi konark temples religious travel
Other articles published on Dec 15, 2017
We use cookies to ensure that we give you the best experience on our website. This includes cookies from third party social media websites and ad networks. Such third party cookies may track your use on Nativeplanet sites for better rendering. Our partners use cookies to ensure we show you advertising that is relevant to you. If you continue without changing your settings, we'll assume that you are happy to receive all cookies on Nativeplanet website. However, you can change your cookie settings at any time. Learn more
Change Settings Continue