The Most Instagrammable Streets In India That You Must Visit 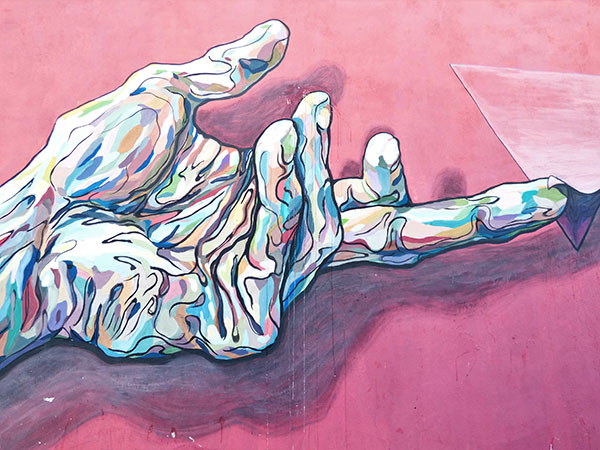 Be it the advertising pop-ups, movie posters or the declarations of teenage love or the very generous doses of paan spittle, our street walls are bathed with all such antics. A welcome addition to these walls is a wide variety of murals, and thanks to a bunch of initiatives who took to themselves the promotion of street art in the country. India has seen a beautiful emergence of wall art lately. The withered street walls of the country are now transformed into a beautiful canvas of art, wise words and splashes of colour. The burgeoning alleys look like a splurge of art and colour rising in the midst of an everyday ruckus, that can make an onlooker's day. Street art in India is taking its baby steps and from what we can see, it is one interesting way to make walls speak. Although, the art of graffiti on walls and buildings, is generally labelled as an act of vandalism by many, we can't stop and admire the thought and expressions that go behind the work.

So what are you waiting for? Grab your cameras and explore the beautifully decked up Instgrammable streets around India.

Varanasi, in Uttar Pradesh, a spiritual hot-spot in the country, is renowned for its pilgrimages and stunning setting nestled on the banks of the sacred and holy river Ganga. The place conjures up various images of the exquisite evening aartis along the lively ghats, centuries old numerous temples and shrines, the rusting settings of the sadhus, pandits and babas in their bright orange attire and all that devotional bling. But with so much activity going on along the river banks, it is very easy to miss out on the fascinating street artwork on the walls and water towers dotting the river banks. With vivid displays of art and colour you'll also get to witness an array of walls adorned with graffiti, along with artists working on these, early in the morning.

Tha Kala Ghoda in Mumbai, Maharashtra, is situated at the heart of the city, and is the creative hub for art and indie galleries as well as designer cafes. The streets of the place are laden with all things artsy and reflect the numerous art designs, artwork of promising young artists and murals dotting its alleyways. The entrance is studded with he popular horse mural and other colourful facades. For a more delightful experience in the streets of Kala Ghoda, visit the place in the month of February, to attend and witness the renowned Kala Ghoda Arts Festival.

The beach town of Pondicherry boasts of some of the really cool street arts in the country. Stroll along the streets of this beautiful town and discover fascinating pieces of urban art adorning the walls of the narrow winding cobbled streets of the town. Witness the cultural richness of Pondicherry with the lingering shadow of its European past, as it comes to life in its art and architecture. A leisurely stroll through the streets of the town will make you run into contemporary and perfectly manicured buildings delineated in bright hues and shades of blues, yellows and reds flanked by quirky street art at every nook and cranny. Of picturesque streets, Victorian style houses, aesthetically decked up little stores dotting the alleyways, Pondicherry has so much up its sleeves to amaze and astound you.

You have probabaly known the City of Joy as a home to a number of budding shutterbugs and artists, but the city has all of us swooning, with its tasteful and impeccable works of street art. The adjacency of the capitalist enterprises alongside the democratic expressions of art in the lanes and by-lanes of the city makes for a bona fide wonder to witness. The city is home to some of the most beautiful graffiti laden streets with a riot of bright colours and hues depicting multitude of thoughts and expressions. The picturesque streets of Kolkata make for a great subject for photography and Instagram, with the backdrop of withered trams, old palatial buildings and hand-pulled rickshaws of the city.

Delhi's best art is to be found on the streets and not in museums or galleries. There is graffiti, paste-ups, stamps, and some amazing pieces of street art on the streets of Lodhi Colony, Hauz Khas, Shahpur Jat and many other nooks and corners. It is easy to fall in love with the place and its street arts, as everything is full of character. Delhi is definitely the quirkiest and most eclectic when it comes to graffiti. In the streets of Delhi, it is not difficult to spot the graffiti-laden walls of houses, buildings and large unused industrial spaces packed full of artwork. The city is the very first place in the country, which is home to an open air public art display. The worn out and withered walls are canvases to a burst of colours, art, thoughts and emotions, inspiring others. In addition to these walls, there are also installations and murals that depict extraordinary expressions. The city is a colourful potpourri of Instagrammable spots with graffiti, installations and murals of extraordinary expressions.