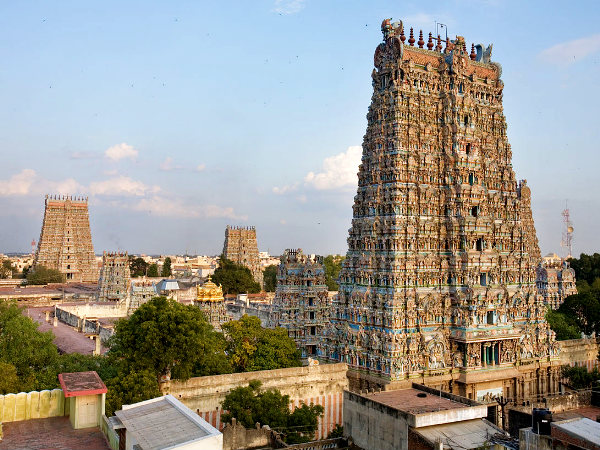 Goddesses are regarded as the most powerful deities in India. Be it is grama devate (village goddesses), Goddess Durga, Goddess Sharada or Goddess Lakshmi. Each have numerous followers across India. 'Shakti', the feminine power has been given a high status in Hindu mythologies and religious texts. Navratri or Dasara is one time of the year when Goddesses of all forms are worship in a special way. Let us make a virtual tour around the three most famous devi temples in Tamil Nadu this Navratri 2016.

Goddess Kanchi Kamakshi is not just famous in Tamil Nadu but also in other parts of South India. Sri Kamakshi is none other than Parvathi who presides in the main sanctum of Kamakshi Amman Temple in Kanchipuram. Interestingly, this is the only Parvathi Temple in Kanchipuram. The beautiful idol of Kamakshi sits in Padmasana pose at the sanctum of the temple. This age-old Pallava architecture of Kanchi Kamakshi Temple is one of the masterpieces of the dynasty.

Special poojas are performed during the time of Navratri and on Pournami (full moon days). It is believed that goddess will be even more powerful on these occasions. Brahmostsavam is another major event which happens annually at this temple.

How to Reach Kanchi Kamakshi Temple

Kanchipuram is around 75km from the state capital Chennai. It is a well-developed historical city which is connected by road transport and railways.

Navratri is celebrated with all the pomp and fervour in Madurai Meenakshi Temple. The temple premises is decked in lights and the Goddess is dressed in grand ornaments and clothing. Special poojas are also offered to the Meenakshi Amman during the Navratri Utsav.

How to Reach Madurai Meenakshi Temple

Madurai is one of the famous cities in Tamil Nadu. It is well-connected to other parts of the state and the country. Madurai is 419km from Chennai and 215km from Coimbatore.

The whole region is named after Kumari Amman Temple! The Southermost tip of India is famous as Kanyakumari in India. "Kanya" means a young-unmarried girl; here Devi Kanya Kumari is the sanyansin who is called Sree Bhagavathy. It is also said that Lord Parashurama established this temple. According to mythology, Sati's spine fell here and Kanya Kumari was created. It is one of the Shakti Peethas in India.

The 9-day extravaganza of Navarathri festival is celebrated in a grand way. It is also the time for various cultural events in the temple. The Navarathri Mandapam is the venue for the events where devotees can showcase their talent. Hence, Kanyakumari Temple is also one of the most famous devi temples in Tamil Nadu.

How to Reach Kanyakumari Temple

Kanyakumari is a popular religious as well as a tourist place in Tamil Nadu. Kumari Amman Temple is one of the main attractions in this region.