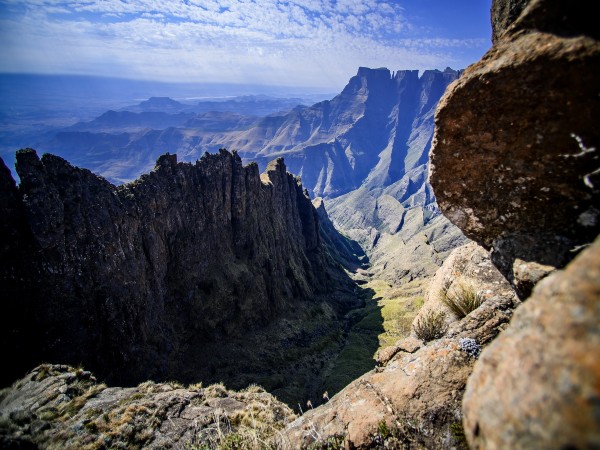 At the northern end of South Africa's Drakensberg range, a curving wall of sheet cliffs soars skywards above grass-covered plains. Known as the Amphitheatre, the towering crescent forms the precipitous edge of Mont-aux-Sources, a boggy and misty plateau overlooked by a summit more than 10,500ft (3200m) high.

Cyrstal-clear springs bubble up on Mont-aux-Sources. The Tugela River starts here dating across a gentle incline and then leaping wildly over the Amphitheatre's edge in a series of Magnificient falls and cascades. Its total drop of 3110ft (948m) makes it the world's second-highest waterfall.

It was the springs that led two French missionaries to name the mountain Mont-aux-Sources - 'mountain of springs', To the Sotho people, it is Phofung - the place of the eland, an antelope that roams the area. The missionaries, who explored the plateau in 1836, noticed that it is the source of major rivers, some flowing to the Atlantic and others to the Indian Ocean. As they approached the mountain, their guides killed an eland which, they wrote, was 'hastily broiled and devoured by the hungry and travel-weary party.

Two great outcrops of rock stand at the plateau's edge. The fang-shaped Sentinel marls one end of the Amphitheatre's 2i/2 mile (4km) wall. The other end is the Eastern Buttress, an imposing pedestal of rock that stands dark and serene above the emerald valleys below. Forbidding at night, the Amphitheatre's mood switches suddenly as the sun rises and its lofty ramparts are charged with gold.

To those who have scaled Mont-aux-Sources, it seems an enchanting, though lonely place. The summit gives extraordinary views of other great peaks along the precipitous eastern edge of the Drakensberg.

From time to time a booming bark rolls across the Drakensberg's ravines and gorges, for they are the home of the human-like chacma baboons. Their waa-hoo call is a warning that alerts the rest of the troop of 15 to 100 animals to danger. The baboons react at once. With the females and young in the lead, they scurry for high ground, letting off a fusillade of threatening barks. Yet faced by a leopard, their chief enemy, they may lash out, throwing a barrage of stones and advancing on the marauder with shrieks until it retreats.

A group of Boer Voortrekkers struggled down the edge of the Drakensberg near to Mont-aux-Sources in 1837. Descendants of Dutch settlers, the Voortrekkers - 'forward journeyers' - were dissatisfied with British rule in Cape Colony and wanted to find empty land where they could set up an Afrikaner state with their religion, language and ways.

Between 1836 and 1838 about 10,000 Voortrekkers left their farms and headed northwards in a covered wagon about 15ft (4.5m) long. A storage box at the front served as a driving seat and held, amongst other things, the family Bible. The group heading for Natal Fared the steep descent from the Drakensberg plateau. TO slow the wagon on the way down, the rear wheels were replaced with trees. The drivers then walked behind, taking some of the wagons' weight by hauling back on leather straps.

Only a few months later, an attack by Zulus on scattered wagons left 500 of the Natal Voortrekkers and their servants dead; one witness wrote of people weeping by the plundered wagons, painted with blood'. After this attack, the Voortrekkers formed their wagons chained together end to end to make a defensive wall, with the livestock herded inside. More battles with the Zulus followed before the Voortrekkers settled down to farm their new land, with the cliffs and peaks of the Drakensberg as a dramatic backdrop.