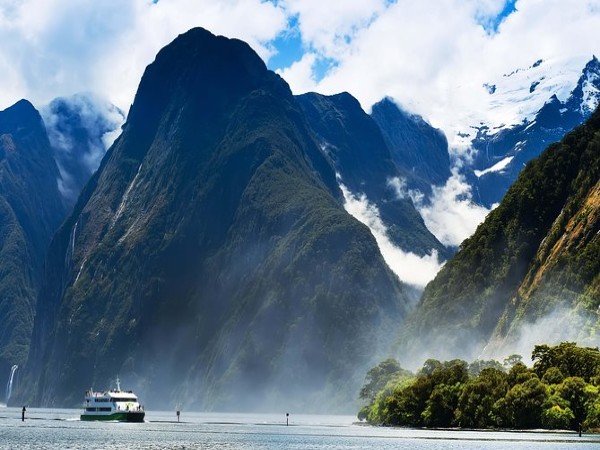 Dusk on a still day is the best time to appreciate Milford Sound (also known as Piopiotahi). Mist tips the mountain peaks that rise steeply from the water edge and are mirrored in the motionless blue of the sea. Captain James Cook, the first European to discover New Zealand's fiordland in the 1770s, missed the concealed entrance to Milford Sound altogether, so was denied a sight of its dazzling scenic splendour.

A finger of the sea stretching 9 miles (15km) inland, the sound was given its European name by John Grono, the Welsh captain of a sealing vessel, in the 1820s. He called it after his home town of Milford Haven in South Wales. But to the Moari People who came to collect greenstone from the beach at Anita Bay, near the mouth of the sound, it was known as Piopio-Tahi, which means 'lone thrush'. Both names are now used for the area.

The thrush was said to be the companion of a legendary Maori Folk hero, Audi, who sought immortality for the human race from the Goddess of Death by making love to her while she slept. But next morning she was awakened by the thrush's song, and in her furry crushed Maui to the death between her thighs. The Brokenhearted bird flew to Milford Sound to live in solitude and repentance.

Glaciers gouged out the hanging valleys and deep, steep-walled narrow troughs of Milford Sound and its fellow fjords on Sound Island's southwest coast around a million years ago. The Tasman Sea took over as the ice melted some 10,000 years ago. Maori legend, however, has a more poetic tale. It tells how South Island was the hull of a partly sunken canoe that turned to stone, and with an axe by the Sea God. He began his work in Fjordland, and the jagged coast and Islands at the extreme south around Dusky Sound are attributed to his initial inexperience. He improved as he worked northwards, and Milford Sound, the most northerly of the Fjords, was his finest creation.

The Goddess of Death also took a hand, however. She was so alarmed by the attractions of the area that, to discourage human visitors, she released insect pests - small black sandflies that inflict itching bites. The place of release is said to be Sandfly Point in Milford Sound, where the insects are most troublesome.

Mitre Peak, 5550ft (1691m), which lies halfway along the southern shore of the sound, is one of the highest mountains to rise straight from the sea. It was named by Captain J.L. Stokes, commander of the British Navy survey ship Acheron in 1851, who thought the peak looked like a bishop's mitre. Captain Stokes was entranced by the towering cliffs of the sound which, he wrote, 'dwindled the Acheron's masts to nothing. As with many of Milford Sound's mountains, verdant rainforest clings to Mitre Peak's lower slopes, encouraged by the high rainfall of one of the wettest parts of New Zealand.

Fierce, frequent winds and heavy rain make the sound a wonderland of fleeting waterfalls, some wind-blasted with such force that they soar skywards. There are many impressive full-time waterfalls, too, such as Stirling Falls, which sluice 480ft (146m) straight into the sea from between two curiously shaped rocks known as the Lion and the Elephant. Bowen Falls, around 50ft (15m) higher, make a two-tier drop to the sea, bouncing off the rocks as they go.

But these waterfalls are just trickles compared with the magnificent Sutherland Falls, which cascade in three huge leaps down the mountainside from Lake Quill into the Arthur River, at the head of the Sound. These falls are, at 1904ft (580m), the tenth highest in the world. Donald Sutherland discovered the falls while gold prospecting when he first visited the area in the 1860s.

'If I ever come to anchor, it will be here,' he vowed. HE fulfilled that vow in 1877 and remained at Milford Sound until his death at 80 in 1919. Known as the Hermit of the Sound. Scots-born Sutherland built himself a cottage beside Freshwater Basin and explored alone for two years before being joined by a friend, John Mackey.

Together they came across what was to be named the Sutherland Falls in November 1880, while exploring off-shoots from the Arthur River Valley. Until a track was cut by Sutherland in 1888, Commissioned by the provincial government, the falls were inaccessible to all but the most determined visitors. Will Quill, one of the young surveyors with the job of mapping the track area, climbed to the top of the falls and came upon the lake that now bears his name.

Quill told colleagues: 'The outlet is a deep chasm about a hundred yards in length. The water rushes through this chasm with great force and swiftness, making terrible noise'. Quill died a year later in a fall from the Gertrude Saddle, not far away. The track cut by Sutherland became part of the Milford Track, a rugged, three-day walking route that stretches 30 miles (50km) north from Lake Te Anau to the head of Milford Sound.