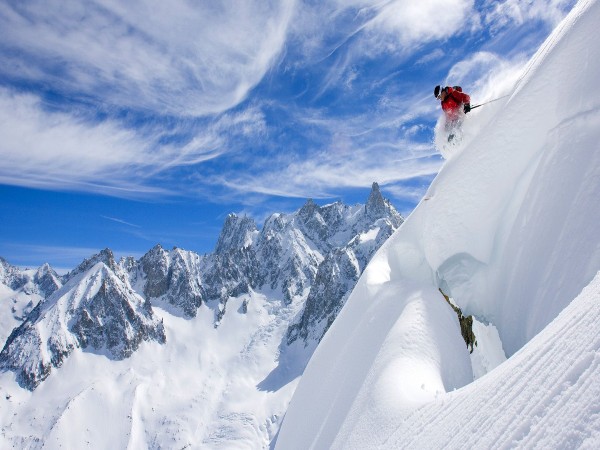 Imagine a huge, river roaring down a rugged, winding Alpine valley, huge waves rearing, and deep troughs appearing. Suppose that, in an instant, it was frozen into a solid mass at the height of its violent movement. Then, in your mind's eye, you would see the Mer de Glance - the largest glacier of the Mount Blanc range, its jagged peaks and icy depths a source of dreadful fascination and sublime inspiration over the past 250 years.

The glacier and one of its earliest-known English admirers, William Windham, began the fashion for mountaineering in Europe. Winham came from Felbrigg in Norfolk and was one of a colony of English people living in Geneva, Switzerland, during the 1740s. He first saw the Mer de Glace in 1741.

Windham made the arduous journey from geneva to the Chamonix Valley in France with a party of other young Englishmen and their tutors. They camped in the Chamonix meadows before setting out for Mont Blanc. The young men risked broken limbs, snow-blindness and frostbite.

But the sublime beauty of the area and sharp contrast between Mont Blanc's white, soaring peak and the awe-inspiring ruggedness of the Mer de Glace winding down its slopes justified the enormous effort and discomfort.

After climbing for four-and-a-half hours to the spot where the Hotel Montenvers now stands, they stepped onto the glacier and into history, for Windham's description gave rise to the glacier's popular name - Mer de Glace (Sea of Ice). 'The Descriptions which Travellers give of the Seas of Greenland seem to come nearest to it,' he wrote.

Today, visitors can enjoy the rugged granduer of the glacier with far less effort and in greater comfort. From Chamonix, a rack-and-pinion railway clanks its way up through spruce and pine forests to the hotel complex on the very edge of the Mer de Glace.

A glacier moves imperceptibly but constantly - as is dramatically shown when it ejects at its snout the remains of a victim who fell into a crevasse many years before and much farther back.

The ice that is lost by melting when the glacier reaches the lower levels is generally replaced by the snow that accumulates at higher levels. But measurements taken over the last century have revealed that some glaciers are maintaining their lengths and others are either increasing or diminishing. The Mer de Glace, now about 4.4 miles (7km) long, is shorter and thinner than it was in the 1820s, during the cooler temperatures of the Little Ice Age. It was probably at its longest in the mid-17th century. The retreat of the ice is evident from the isolated mountain huts that stand on steep slopes or are reached by ladders - once they were easily accessible from the icy surface.

The writings of Windham and others of his party aroused the curiosity of other adventurers. At that time, few mountain peaks had been climbed. It was a dangerous undertaking, for often men venturing into the mountains failed to return. But in 1760 Horace Benedict de Saussure, a Professor of Natural Philosophy in Geneva, was so moved by the sight of Mont Blanc towering above the Mer de Glace that he offered a cash prize to the first man to reach the 15,770ft (4807m) summit of the highest mountain in the Alps.

But 26 years passed before the prize was won. Dr Michel Gabriel Paccard, a doctor in Chamonix, and Jacques Balmat, a guide and crystal hunter, together reached Mont Blanc's summit on August 8, 1786, after a 14-hour climb. Saussure awarded the prize to Jacques Balmat because he thought that Dr Paccard, who was a 'gentleman amateur, would not accept it.

The drama and magnificence of Mont Blanc and the Mer de Glace attracted many writers, among them Lord Byron, Percy Bysshe Shelley and Mary Shelley. Their reactions to the wild beauty of the area appear in their writings, perhaps most famously in Mark Shelley's story of Frankenstein - the first science-fiction novel.