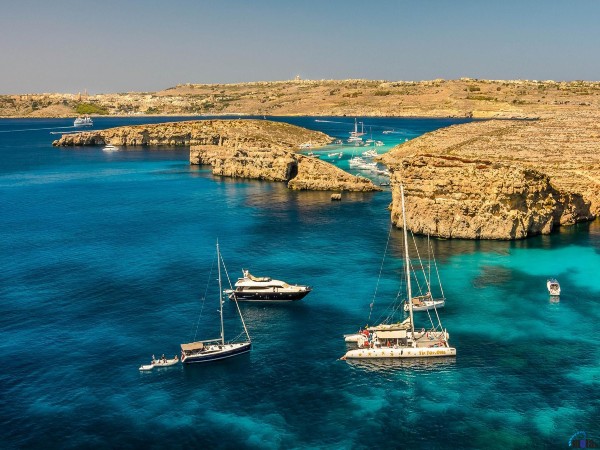 The landscape is sun-bleached, rocky and waterless; where the thin soil can be framed it is intensively worked. The tawny fields are crisscrossed by dry stone walls - the soft golden limestone is used for all construction here. Though relatively small, Malta is one of the most densely populated places in Europe; yet somehow it does not feel that way.

Malta lies in the middle of the Mediterranean; its closest neighbour is Sicily but it looks very North African.

Civilization came very early - the Neolithic temples date to 3500 BC. Later Malta's strategic position made it very important and it was colonised by a succession of powers from the Phoenicians to the British. Christianity arrived during Roman rule with St Paul, who was shipwrecked here and then sheltered by the islanders.

The Arabs had an impact on the language - Malti has Arabic Grammer but uses words from many languages and is written in the Roman alphabet. The Knights of St John arrived in 1530, held the fortified island against the Turks and handed it to Napolean in 1789, the left the greatest architectural legacy. In 1942 Malta endured five months of intensive German bombing. It became independent in 1964 and is now part of the E.U English is universally spoken.

This is a holiday island, with a good climate and excellent swimming and diving, but the unique historical sights are the real highlights. The Knights' fortified cities that surround the magnificent Grand Harbour are unforgettable.

Ancient temples and other fascinating archaeological sites dot the island. Hundreds of churches, many flamboyant, domed Baroque structures, dominate the town, village and landscape. Despite mass tourism, Malta retains the feel of an older world. The people are well-mannered, friendly and devout - though they enjoy the summer-long fiestas, when the night explodes with fireworks.

Direct flights from many European cities, and ferries from Sicily.

The knights of the order of St John paid a token of a falcon to the Holy Roman Emperor for the island.