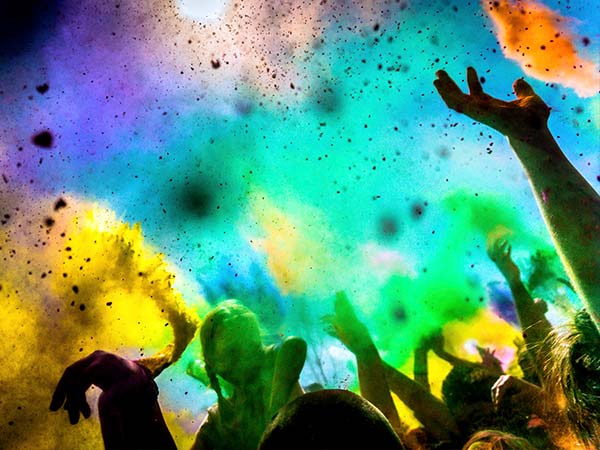 As winter comes to an end, it's time for festivals in March to bring in the joys of summer! March doesn't only bring sweltering heat in India, but a lot of exciting festivities and events that make the whole of India revel. Festivals in March paint India with lively colours which allure millions of tourists from across the world.

The subsequent list of festivals in March tells you about some famous and traditional festivals observed in India. While a few celebrate the culture, others let you get immersed in ethnic colours!

The age-old Indian holistic practice of wellness and health - Yoga, will be revered at the International Yoga Festival organised by the Paramartha Niketan in Rishikesh in March 2020. Where over 150 classes on different styles of yoga are practised and around 70 presenters from 20 different countries will be seen demonstrating and teaching the age-old wisdom! Also, you can register for other sessions such as Sanskrit chanting, meditation classes, and reiki.

Where: Rishikesh, Uttarakhand
When: 1 - 7 March

Holi is one of the most exciting and colourful festivals celebrated in India! Incorporated among the most joyous of Indian festivals; Holi observances begin the previous night with a bonfire/blaze, that represents the victory of good over evil. And the next day people play with dry colours and splatter water on each other. Also, consuming bhang (an intoxicating drink) is common and popular during Holi in Rajasthan and the other North Indian States!

Shigmo is a 16-day fiesta, observed with decorations, displays, community dances and music. Shigmo was traditionally revelled to greet warriors home after months of battle. It's now a street festival replete with engaging music and lively dancing and of course, a lively float parade. Draped in multicoloured outfits, people walk holding colourful flags and play large musical instruments like flutes and the dhol Tashas.

Mewar Festival is a monumental event that takes place every year in Udaipur. The Gangaur Ghat, adjacent to Lake Pichola, comes alive with a display of hues as the wedding of Isar (Lord Shiva) and Goddess Parvati is celebrated. Women set loose the clay idols of the two, on little boats as they recite prayers to wish them a happy married life. Also, a dazzling fireworks show, conclude the festivities.

Anage-old festival of music and dance, Hoysala Mahotsava is celebrated across most of the temples in Karnataka. However, thebest place to observe this festival isBelur.Hoysala Mahotsava is celebrated to honour the traditional art forms of the native land. The temples will be illuminated with earthen lamps. Many rituals take place inside the temple during this popular festival.

Where: Belur, Karnataka
When: 16 March

About 25 well-decorated elephants form a part of the grand cultural spectacle held at the Chinakkathoor Bhagavathy Temple in Kerala. The elephants offer perfect photo-ops for enthusiastic photographers. Also, You can relish the endeavours of the traditional Kerala orchestra called the Panchavadyam and art forms like Kathakali, Theyyam, and Kumbakali besides shadow puppet shows.

Where: Palakkad, Kerala
When: 11 March

This is one of themost popular festivals celebrated in North East India.Chapchar Kutis alocal cultural festival, observed with dance, music, and other customs.This time of the year (Summer) represents theend of the harvesting season in North East India.During Chapchar Kut, the producers burn the remains in their field. And to commemorate this, a large fire is generated and young population dance about it. TheChai Danceis themain highlights of this festival. Also, you can find various local games conducted at the venue.

Celebrated to observe Lord Ram's birthday, Rama Navratri is a nine-day festival similar to Dusshera! For nine days, nine distinct forms of Durga are showcased and honoured. Each day, a unique food delicacy is prepared and served to the goddess. Many abstain from all kinds of food during the first eight days and on the final day i.e on a ninth day, the fasting ends with a great feast in every household. The main purpose of this festival is to condition the human body for the approaching harsh summer.

Where: Telangana and Andhra Pradesh
When: 25 March - 3 April

Ugadi is a popular festival celebrated in South India as New Years and is also observed like any other Hindu festivals with rituals, dance, music and cuisine. A six-taste course named 'Ugadi Pachadi' is made on this occasion. Other popular treats to try during this festival are Bobbattu, Holige. A few communities in Maharashtra also commemorate this festival.

Where: Telangana, Andhra Pradesh, Karnataka, and others
When: 25 March

Myoko Festival is is a harvest festival celebrated in parts of North East India. This tribal ceremony focuses on dance, music, cuisine, and other cultural activities. Top cultural activities conducted during this festival are fireworks, drum shows, martial art performances, and others. Visit the Apatani Village to watch inhabitants sowing paddy, and other various exotic rituals, which are led by a local shaman.

Ezhara Ponnana festival offers a rare chance to witness a magnificent parade of golden elephants, which were offered to the deity by Anizham Thirunal Marthanda Varma, the former ruler of Travancore. And it is followed by traditional music and dance performances.

Where: Kottayam, Kerala
When: 3 March

Packed with cultural events, this local festival is commemorated every year to honour the state's foundation day. And the cultural events like folk dance, chanting, film screenings, musical performances, and fashion shows, entertain people from all walks of life.