Lesser Known Destinations To Visit In Himachal Pradesh During February-March 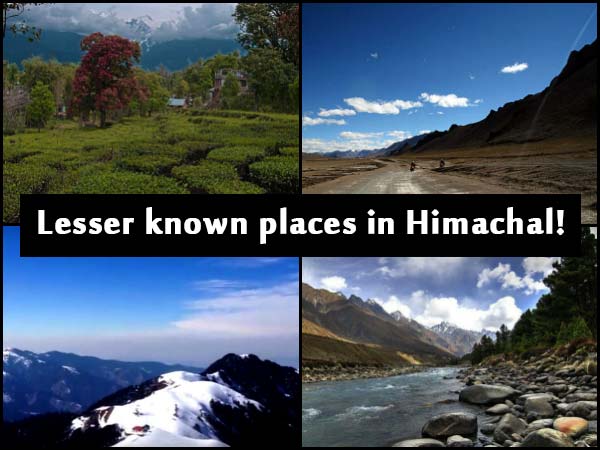 Situated in the shadows of the mighty Himalayas, Himachal Pradesh is often referred to as "Dev-Bhoomi", which literally translates to "Land of the Gods", owing to its numerous temples and mythological destinations.

It is a place which exhibits diverse cultures, festivals, scenic landscapes and serene environments, and has always been the preferred destination for every Indian's summer holiday.

Commercial hotspots like Shimla, Kullu and Manali are well-known destinations; however, these places have all lost their charm owing to the number of tourists who throng these places each holiday season. And so we took it upon ourselves to travel deep into the Himachal landscape and explore the lesser known destinations in Himachal Pradesh where you can spend your vacations, have an experience of a lifetime and not be worried about emptying your wallet too much.

Take A Tour Of Kasol In Himachal-Pradesh

We give you eight such alternate travel destinations of Himachal Pradesh that should be a part of your next trip to this beautiful Northern Indian State, especially if you are looking to travel during spring time - between February and March.

Palampur is a hill station that is known for its numerous tea gardens, paddy fields and is called the "tea capital of North India". Travellers can enjoy the majestic scenic beauty of the Dhauladhar Range of mountains and the slopes of the Kangra Valley from this place.

Palampur and several places surrounding it are also popular for adventure-sports like hand-gliding and trekking. The mild summer weather makes Palampur an ideal place to visit during February - March.

Chamba is an ancient town located in the Chamba district of Himachal Pradesh. Located on the banks of the Ravi River, Chamba boasts of numerous temples, palaces and plays a host to two popular Jatras (Fairs) - The "Suhi Mata Mela" and the "Minjar Mela", which last for several days. What's more is the music and dancing that you can get to enjoy while here.

Chamba is also well known for its arts, crafts and the ‘Pahari' style of paintings that are said to have originated between the 17th and 19th centuries. Among the many monuments that can be seen here are the Champavati Temple, The Lakshmi-Narayan group of Temples, The Sita-Ram Temple, Bansi Gopal Temple, Chamunda Devi Temple and the Akhand Chandi Palace. February and March are the best months to visit Chamba, which is also a hill station owing to its moderate climate.

Shali Tibba is a prominent peak which is hard to miss. It towers majestically over the district of Shimla, situated behind the Mashobra Range. This peak provides a splendid vantage point for a panoramic 360-degree view of Himachal Pradesh.

Khatnol Village serves as the base-camp through which a serene and beautiful road leads to the Shali top through pine and cedar forests. The trek to Shali Tibba is short, magnificent and can be completed in a single day. It is an ideal weekend getaway from Shimla.

Located in the Baspa Valley of Kinnaur District, Chitkul is the last inhabited village near the Indo-Tibet border. The Indian road ends here. During winters, the place remains covered with snow and so spring/summer time is best for visiting Chitkul.

Of particular interests in Chitkul are its houses with slate or wooden plank roofs, a Buddhist temple and a small tower. There are several wooden houses that have been turned into hotels; however, the best option is to stay at Sangla and then make the day trip to Chitkul.

Key Monastery is a Tibetan Buddhist Monastery located on the top of a hill, close to the Spiti River, in the Spiti Valley of Himachal Pradesh. It is one of the biggest monasteries in the valley and is a religious training centre for Lamas. The monastery is famous for its ‘Pasada' style of architecture, which is characterised by two or more storeys and often plays the role of a fort-monastery.

The rooms with murals called ‘Tangyur' are a must-see. The monastery is well-known for its ancient murals, rare thangkas and ancient weapons. The images of Gautama Buddha in Dhyana (meditation) are a must see. The scenic landscape which forms the backdrop of the monastery is also a key factor in attracting a large number of tourists, making a beeline for the remote monastery.

The beauty of the valley is breath-taking as it is surrounded by snow-capped mountains and glaciers. Accommodation is not available at the monastery. The best option therefore is to arrange a stay at Kaza which offers numerous options in terms of hotels and resorts.

Jhanjeli, a scenic valley located around 67 km from Mandi, offers a tranquil and calm environment for vacationers. The valley is used as a base for various trekking expeditions to places like Shikari Devi, Chindi, Karsag and Shoja.

Apart from rest houses, Jhanjeli has good facilities for accommodation. The popular temple of Shikari Devi is around 15 km from Jhanjeli and travellers can also visit the Kamrunag Temple, and the various sacred lakes around the place.

Rewalsar is a small town located in the Mandi District. The place is also known locally as ‘Trisangam'. The main tourist attraction is a beautiful lake around which the town is built and named after. There are also three temples here dedicated to Sage Lomas, Lord Krishna and Lord Shiva, respectively.

Kunihar is a valley situated between mountains in the Solan District of Himachal Pradesh. It is also known as "Hatkot" and "Choti Vilayat". The name of the place comes from a small river that surrounds the valley like a garland. Kunihar is well known for the famous cave of ‘Bhole Nath', also known as "Dyars". Kunihar is around 35 km from Shimla and lies on the way to Jubarhatti from Solan via Subathu. This makes visiting Kunihar a great option to indulge in village/countryside tours.

Situated at a distance of around 40 km from Shimla, Arki is a small town in the Solan District. The main attraction here is the Arki Fort, which represents a splendid fusion of Rajput and Mughal architectural styles. Now converted into a heritage hotel, Arki Fort is adorned with beautiful paintings and frescos.

‘Karol ka Tibba' is the highest hill around Solan town in Himachal Pradesh and is accessible through a 5.6-km trek leading through fir groves, sprawling grasslands, dense forests and panoramic views. Karol temple and a mysterious cave known as the ‘Pandava Gufa' are the two must-visit spots here.

The Pandava Gufa is believed to be the oldest and longest (around 28 km) cave of the Himalayas. There are numerous myths and legends about this cave. The Pandavas from the Mahabharata are believed to have lived and meditated in this cave during their exile. Owing to this religious connection, a temple has been constructed beside the cave.

Located at a distance of 50 km from Shimla, Tattapani is famous for the hot-water springs that can be found at the banks of the Sutlej River. These waters, rich in sulphur, are believed to have a splendid medical value and are known to be very beneficial for the skin. Tattapani is a day's trip from Shimla and apart from the hot-water springs, tourists can pay a visit to the ancient Shiva Cave, the Mahunag Temple and indulge in some adventurous riverrafting activity.

The Chanshal Pass, also known as the Chanshal Valley, is located around 160 km from Shimla and is a place which best serves the nomadic appetite of those looking to escape the daily hustle of life. The valley sits on top of the Chanshal Peak, which is the highest point in the Shimla District.

The Chanshal Pass acts as a link to connect Rohru and Dodra Kwar. The valley is considered as one of the best places for a bike ride, and the roads here are steep and rough. The valley also offers tranquillity and major scenic spots. The nearest accommodation available is at Rohru.

Formally known as Brahmpura, Bharmour was the ancient capital of Chamba District in Himachal Pradesh. Situated at an altitude of 7000 feet in the Budhil Valley, Bharmour is well known for its scenic beauty and ancient temples.

Some of the temples are believed to have been constructed in the 10th century. The land around Bharmour is blessed with abundant alpine pastures and it provides home for nomadic shepherds. The foothills are filled with orchards and terraced farmsteads. The Chaurasi Temple is located at the center of Bharmour town and holds immense religious importance.

Nako Lake is a high-altitude lake in the Kinnaur District of Himachal Pradesh. It forms part of the boundary of Nako village and almost half of the village is buried in the lake's border. The lake offers breath-taking scenic beauty, as it is surrounded by willow trees, along with four Buddhist temples located on its banks.

There is also a foot-like impression near this place which is believed to be that of the Buddhist saint Padmasambhava. Several miles from Nako Lake is a village known as Tashigang around which are located several caves where Padmasambhava is believed to have meditated and given discourses to followers. A few caves have footprints that are believed to be of fairies and demi-gods. The caves are sacred for the local residents.

The Sri Triloknathji Temple is in a village of the same name, located around 9 km from the village of Udaipur, in the Lahul and Spiti District of Himachal Pradesh. This holy shrine, dedicated to Lord Shiva, is so important that it is considered as the most sacred pilgrim spot next only to Kailash and Mansarovar. The uniqueness of the temple lies in the fact that it is the only temple in the world where both Hindus and Buddhists pay their reverence to the same deity.

Kibber is the highest village in the Spiti Valley of the Himalayas, and contains a monastery and a wildlife sanctuary. Kibber is located 16 km away from the tiny village of Kaza, and a bus service connects both places in the mild summer season that is between February and March.

Keylong is the administrative centre of the Lahaul and Spiti districts of Himachal Pradesh, and is located along the Manali-Leh highway. Jeylong faces the Kardang Monastery, and it is regarded as the largest and most important monastery in Lahaul. Tourist spots near Keylong include the Kardang, Shasur and Taylu monasteries. The annual Lahaul festival is held each July and it attracts large crowds.