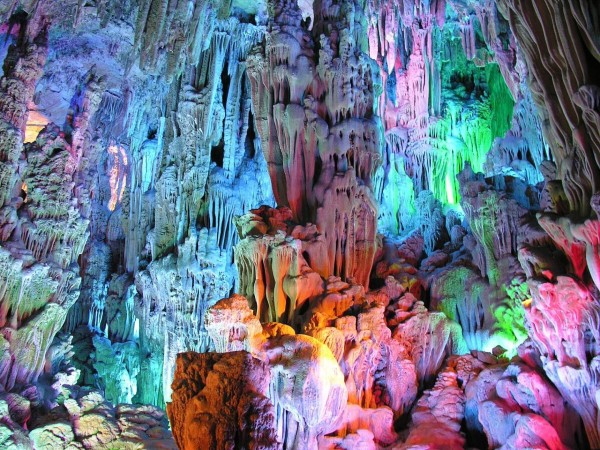 Disbelief is a constant companion to those who explore Lechuguilla Cave in New Mexico. So far, around 101 miles (156.5km) of caverns and passageways have desert mountains in the southern United States, making it one of the world's longest caves. Within are cave 'decorations' - encrusted minerals that hang from the ceilings and embellish the walls and floors.

The beauty and variety of the decorations are stunning. Hollow stalactites like drinking straws up to 15 ft (4,5m) long hang from cave roofs. Shelves shaped like birdbaths are supported like birdbaths are suspended from the roof by columnar stalactites, and strands of gypsum as fine as human hair reach 20ft (6m) in length. There are formations resembling pearls, popcorn, balloons and minute rime-covered fir trees, and others that look rather like elegantly draped cloths.

It seems strange that this extraordinary wonderland was not discovered until the 1980s. In 1914 some local men made short-lived attempts to mine the bat guano (droppings), found just inside the cave entrance, for use as a fertiliser. Over the years, the occasional curious caver ventured in, but not until 1986 did a group of cavers make the final breakthrough. They had been intrigued by strong winds that blew in the entrance, signalling the existence of much larger caves deeper down. After digging away some floor debris they found an almost vertical shift which they named Boulder Falls after the boulders which fell as they descended. Beyond lay the maze of beautifully decorated caves.

Exploration of Lechuguilla has been slow and meticulous, and not just because of the difficult terrain and deep lakes to be negotiated. The covers are also intensely aware of how fragile the decorations are, and the changes that they could introduce, such as draughts and temperature increases.

No matter how carefully the cavers place their feet, it is impossible not to crush or dirty some of the pristine surfaces. The many decorations that are made from gypsum (used in making plaster of Paris) are exceptionally fragile - a careless move could damage or destroy a formation that has taken several million years to develop. Even the slight drying out of the atmosphere caused by enlarging the cave entrance could decay the glittering gypsum decorations, and may ultimately weaken them to the point where they collapse.

The cavers have a strict code of conduct. Wherever possible, they walk barefoot to avoid dirtying the cave floors, but they have to be careful not to cut their feet where the floor is jagged in case they leave bloodstains. All waste is removed in plastic bags, and no one washes in the pools of pure water.

Most limestone caves form when slightly acidic rainwater seeps down through the ground, but Lechuguilla seems to have been formed from the bottom up. Gas from deep oil deposits rose through cracks in the rocks and mixed with oxygen and water. The result was sulphuric acid that reacted with the limestone, dissolving out the warren of passages and creating gypsum in the same reaction.

Over several million years, the caves have been decorated with minerals carried through the labyrinth dissolved in water - both calcite stalactites and stalagmites and many gypsum decorations. Gypsum formations of breathtaking beauty hang in the Chandelier Ballroom. They formed when deposits of the mineral higher up in the cave system were dissolved by water, which seeped down through the cave roof and evaporated, leaving growths of crystals.

Cave experts have argued that the Lechuguilla Cave should be open only to researchers, and not to the public, to preserve this Aladdin's Cave of treasures in an unspoiled state.