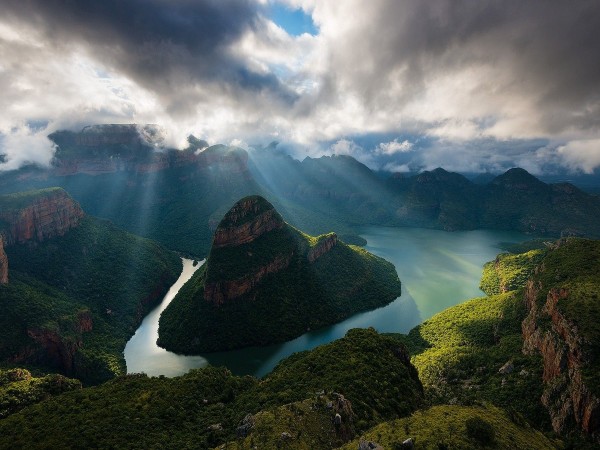 The lyrically named Lapalala Wilderness lies within the UNESCO Waterberg Biosphere Reserve, in Limpopo Province, just a three and half hour's drive from Johannesburg. Despite its name, Lapalala is actually a privately owned nature reserve, created from the consolidation of 19 farms between 1981 and 1999. Currently, some 360 sq km (140 sq mi) in extent, the reserve is still further.

The Lapalala Wilderness is characterized by endless vistas of tip land plains and rugged hills, dissected by craggy ravines. The predominant vegetation here is so-called bushveld - grassland, punctuated by dense clusters of trees and tall shrubs. The 90 km (56mi) or so of rivers with their clear pools and noisy rapids bring the whole area to life.

Within this largely unspoiled landscape, visitors can encounter the wildlife both from the seat of a Land Rover or by foot on guided walks. There are buffalo, hippo, crocodile, zebra, leopard, baboons and many kinds of antelope here as well as over 280 species of bird.

But Lapalala's 'A-list' is without a doubt its black and white rhino. Hunted dangerously close to extinction, both species have only been saved by the strenuous efforts of conversations such as Lapalala's Clive Walker.

Black and white rhino are easy to tell apart - but not for the reason suggested by their names. Black rhinos (Diceros bicornis) are the smaller species and have a hooked upper lip, which they use to tear off great mouthfuls of grass. It was a corruption of the word 'wide' which in Afrikaans sounds like 'white', that led to them being called white rhinos when in reality they are much the same colour as black rhinos.

To be able to have a close encounter with both these species in a single day leaves visitors with memories to last a lifetime and makes Lapalala a truly special place.

There is plenty to see all year.

By road or bus from Johannesburg. Or from the nearest town Vaalwater i.e, 50 km (30 mi) to the southwest.

There is a charge to enter the reserve. Game drives and guided walks may need advance booking.