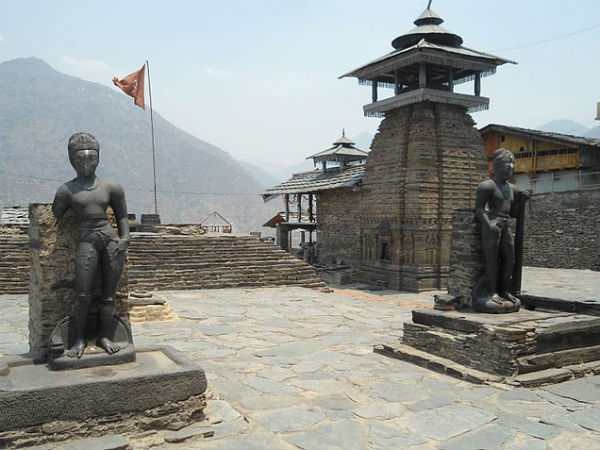 Amidst the backdrop of Himalayan foothills stands this shrine of Lord Shiva. It is built similar to the other temples of the region. It is a stone architecture perched on a hill top in the village of Lakhamandal.

This shrine is known as Lakhamandal Temple in Dehradun. It is one of the famous Shiva temples in Uttarakhand.

The legend of Lakhamandal is related to the epic Mahabharatha. It is said that the Pandavas were living in a house named Lakshyagriha (house of wax) in this region. That is when Duryodhana plots to burn the wax house Lakshyahriha. Legends say that this house was in Lakhamandal.

Another legend is connected with a hidden cave near Lakhamandal Temple. This cave which is known as Dhundi Odaari is said to be the cave where the Pandavas took refuge when Duryodhana was searching them.

'Lakha' meaning many and 'mandal' meaning temples; the place of many temples or in particular Lingams. Here, the Shiva Lingam is made out of graphite and it reflects when it is wet.

The doormen or dwarapalakas are the intriguing part of the temple. Some believe they are the statues of the Pandava brothers Arjuna and Bhima while others say they are 'Manav' and 'Dhanav'. It is also said that they are Jaya and Vijaya (the doormen of Lord Vishnu's abode). Since the place is related with Mahabharatha, it is possible that these are the idols of the two Pandava brothers.

Temple inscriptions indicate to the period of Gupta dynasty. The temple is said to be built during 8th to 15th century.

How to Reach Lakhamandal

Lakhamandal is situated on the Mussoorie - Yamunotri Road. Tourists can take buses or taxis from Chakrata to reach Lakhamandal.

Dehradun Railway Station is the nearest railway station to Lakhamandal.