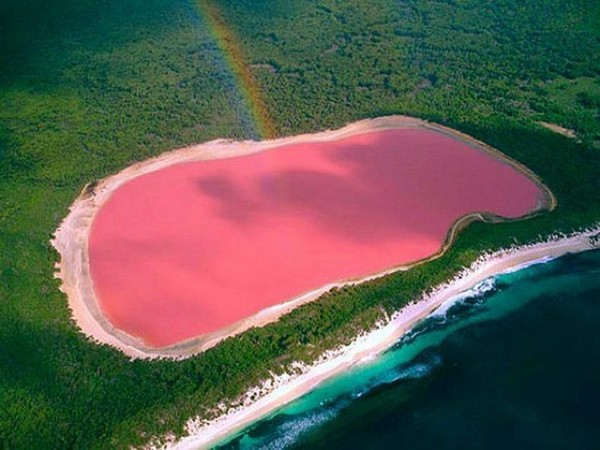 Seen from the air, the glistening pale pink surface of remote Lake Hillier looks like glace icing on an oblong cake. The lake gives unexpected colour to a densely wooded corner of Middle Island, one of more than 100 small islands that make up the Archipelago of the Recherche that lies off Western Australia's south coast.

The shallow briny lake, about one-third of a mile (600m) across, seems to belong more to the world of Hansel and Gretel than to that of storm-tossed seas. Rimmed with white salt and encircled by dark green forests of eucalyptus and paperbark trees, the lake is separated from the ocean's deep blue waters by a narrow strip of white dunes and sand.

The reason for the lake's pink colour was investigated in 1950 by a team of scientists, who expected to find an alga such as Dunaliella Salina in its salty water. In very saline water, this alga produces a red pigment and is responsible for the colour of Australia's other 'pink' lakes, such as the one close to Esperance on the mainland. Samples of water from Lake Hillier, however, contained no signs of any algae, and the cause of the lake's colour remains a mystery.

The first record of Middle Island's 'pink' lake dates from 1802 when Mathew Flinders, a British navigator and hydrographer, called there on his way to Sydney. A few short-lived commercial ventures followed Flinders's visit - between the 1820s and 1840s sealers and whalers settled on the island, and salt was extracted from the lake early in the 20th century. But salt production ended after only six years and since then the island and its 'pink' lake have been little disturbed.