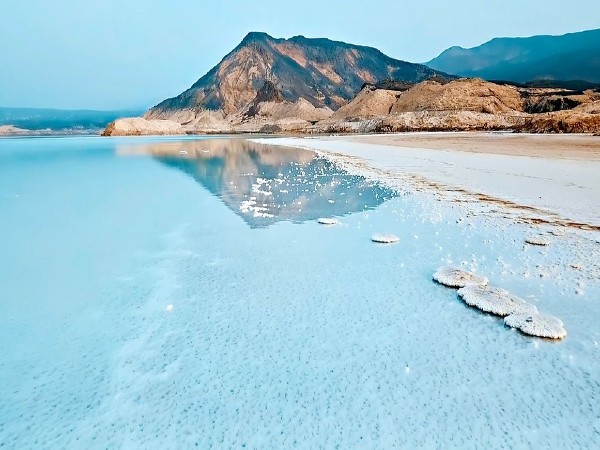 There came a time when the ancient Romans became so salted with the cornucopia of Africa's marvels that they greeted the latest travellers' tale with a polite 'Well, there's always something new out of Africa'. The truth was, of course, they had taken no more than a few tentative sips of all the continent had to offer, and even now, not even the most experienced of old Africa hands would be rash enough to say that its surprises were at the end.

Lake Assal makes the point well. Though not visited by Westerners until the late 1920s, nor properly explored or understood for years after that, it has already established new parameters in our knowledge of the world. For example, it is now recognised as the lowest point on the surface of the continent -510ft (155m) below sea level - while its summer temperature of 57 C (135F) makes it also one of the hottest.

Both these factors contribute to its other claim to the record books, that of being the saltiest body of water on Earth, 10 times saltier than the ocean and far saltier even than the Dead Sea, Statistics apart, Lake Assal is also one of the planet's least hospitable spots. Backed by black, cindery hills of lava, parched by the sun, hardly a shred of vegetation grows there beyond an occasional pioneering thorn. No birds sing; nothing, not even a lizard, moves by the shore. It is a landscape of death.

But it possesses, too, an unearthly beauty. The immediate surroundings are salt flats of a glittering white, while the clear, shallow waters are iridescent blue, shading to turquoise. Delicate fans and fronds of salt break the surface, painted by minerals in all manner of colours from pale green to violet to umber. The shoreline is dotted with the lake's self-created sculptures - grotesque, cabbage-like shapes formed of deposited salt.

Lake Assal owes its peculiarities to its position. It is situated in Djibouti, a tiny state that looks over the Gulf of Aden and the mouth of the Red sea, and in a corner of the Afar Triangle, geologically one of the most disturbed areas on Earth. Here, are three great fissures in the planet's foundations - the East African Rift. The Red Sea and the Gulf of Aden - meet, and earthquakes are commonplace.

Volcanic eruptions in the Afar Triangle are also commonplace, and for millions of years molten rock has been welling up to the surface as the jigsaw pieces making up the Earth's surface move apart. Such phenomena usually take place on the seabed, as in the Atlantic, whose floor is constantly being renewed along its mid-ocean trench.

The Afar Triangle would also lie under the waves, where it is not for the coastal barrier of the Danakil Mountains denying entry to the Red Sea. Instead, the area presents the rare spectacle of the type of crust normally found at the bottom of the oceans forming on dry land.