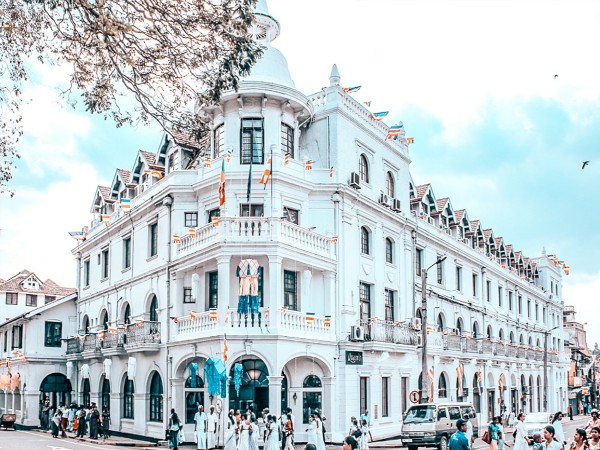 In the Kandy Valley, nestling among the tea plantations slothing the surrounding hills in central Sri Lanka lies the sacred city of Kandy. Although the capital, Colombo, remains the prime commercial centre, Kandy is the cultural capital of Sri Lanka with a rich heritage of living monuments.

This quiet and homely city is a stunning location to learn about the history and culture of Sri Lanka.

Originally called Senkadagala after the hermit Senkada, this city is a sacred Buddhist site. The Royal palace was the capital from 1592 until 1815 when it came under British rule. Built by King Vikramabahu III of Gampola, it lies in the centre of the island, surrounded by a large lake and the Mahaweli, the longest river in Sri Lanka.

The last King, who transformed Kandy into a celestial city, designed the white stone parapet that runs along the lakeside. As seen in the lake's reflection, the cloud-like drift on the walls and wave-like swells make the city look as if it is floating in the sky.

The best-known monument in Kandy is the sacred pilgrimage site of the Temple of the Tooth, said to house one of the Buddha's teeth.

The relic of the tooth of the Buddha symbolizes fourth-century traditions that used to be lined to royalty since the protector of the relic was seen to be fit enough to rule the land. Thus, the Royal Palace and the Temple of the Tooth were associated with the administrative and religious functions of the capital city.

During July or August every year, Sri Lanka's grandest celebration takes place, the Kandy Esala Perahera. The ten-day festival ends on the night of the full Moon, its highlight is a procession of drummers, dancers and decorated elephants carrying a duplicate of the Buddha's sacred tooth. Even after British rule, Kandy has preserved its function as the religious capital of the Sinhalese and a place of pilgrimage for Buddhists.

Surrounded by a loop of the beautiful Mahaweli River, Peradeniya Botanical Gardens are well worth a visit. From the 14th century and the reign of King Vikramabahu III, the garden is known for its orchid house, spice garden and magnificent tropical trees.

July or August (During the Esala Perahera Festival)

This is the largest city in Sri Lanka's hill country.