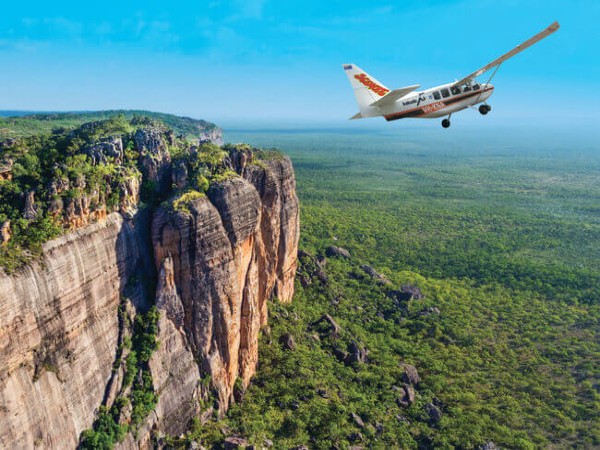 A vast and varied wilderness lies in the extreme north of Australia, the region Australians call the Top End, Kakadu National Park is twice the size of Dubai, and its landscape, as well as varying from place to place, also changes with the seasons. 'The wet starts in early December, with dramatic rainstorms which result in large areas being flooded. In 'the dry' between May and October, almost no rain falls.

A rugged escarpment snakes for more than 300 miles (500km) along the east and south sides of the national park, marking the edge of the Arnhern Land Plateau. The European explorer Ludwig Leichhardt struggled over the plateau in 1845, during an epic 16-month overland journey that had started on the east coast near Brisbane. He encountered 'sandstone blocks in fantastic figures of every shape' with 'vegetation crowding deceitfully within their fissures and gullies and covering half of the difficulties which awaited us on our attempt to travel over it.

Ravines cut into the cliff edge, which in places is over 1500ft (460m) high, During the wet, waterfalls thunder over the cliff. Two of the most spectacular falls are the 650ft (200m) Jim Jim, and the aptly named Twin Falls, whose ribbons of water cascade 330ft (100m) down from the plateau.

The lowland below the escarpment is a mixture of grassland, forest and swamp, broken by quiet backwaters and crossed by rivers. Leichhardt note the beauty of the scenery around one of Kakadu's main rivers, the East Alligator, 'We entered into a most beautiful valley', he wrote, bounded on the west, east and south by abrupt hill, ranges and rocks rising abruptly out of an almost treeless plain clothed with the most luxuriant verdure.'

Kakadu is the land of the Gagugju and Aboriginal people from whom the national park takes its name. Their ancestors came from Southeast Asia at least 40,000 years ago, island-hopping and then making their way from New Guinea by land when the sea level was lower during the Ice age.

To the Gagudju, Kakadu was created when a female ancestral being, Warramurrungundji, came out of the seas to form the landscape and to give life to the people.
She was followed by other creator beings, including Ginga, a giant Crocodile who made the rock country. Some of these ancestral beings, their work done, then became part of the Landscape - Ginga takes a form of a rocky outcrop resembling a crocodile's back. Much of the park is owned by the Aboriginal people, who have leased their land to the Department of the Environment and Heritage.

Aboriginal rock paintings spanning some 18,000 years have been found at more than 7000 sites in the park. The animals in the paintings change over the years, as the sea level rose.

The earliest paintings were made during the last Ice Age when the sea level was low and Kakadu lay about 186 miles (300km) on land. Then the artists painted Kangaroo and Emus.