Jallikattu – The Festival of Bull-taming 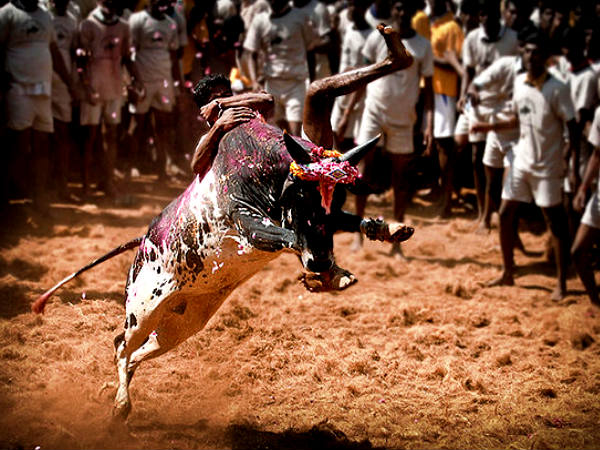 Man versus beast! That has always been the ultimate yardstick of a man's physical prowess. In the South Indian state of Tamil Nadu, this ancient way of judging manliness is still in vogue in the form of Jallikattu.

Jallikattu is a traditional game of bull-taming that is unique to Tamil Nadu. It is celebrated as a part of Pongal (new year) celebrations, on the Mattu Pongal day.

The word Jallikattu derives from the word Salli Kaasu which means a package of coins. A package of coins is traditionally tied to the horns of the bull which is the prize for the one who conquers the bull.

The bulls trained for this festival belong to a special breed called Pulikulam or Jellicut. They naturally have a tendency to fight back, which adds to the flavour of the festival.

Vadi manuvirattu is apparently the most dangerous form of Jallikattu. Once the bull is released, the fighter has to cling to its hump to a certain distance to claim his prize. This version of the sport can be seen in movies and television.

Vaeli virattu is where the bull is released and allowed to run freely in an open arena. The bull attacks the person who approaches it and the fight begins.

Vadam manjuvirattu is the safest version of Jallikattu as it has a lesser risk involvement. The bull is tied to a long rope of around 50 ft and is allowed to run in an open arena. A group of 7-9 men enter the arena and are to conquer the animal in 30 minutes.

Though Jallikattu is similar to the Spanish bull fights, the bulls are not killed here and this is more of a sport than a fight. However, the government has recently taken measures for the safety of the players and the animals, making sure that a team of expert doctors are readily available where the event takes place.

The event is held between January and May in the state, with prior permission of the Collector.