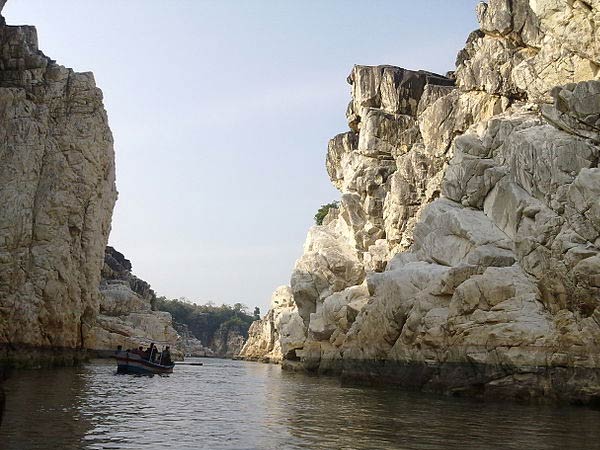 Jabalpur is also known as the marble city of India because of the presence of marble rocks in Bhedaghat, which makes it a world famous and unique tourist center. It is one of the most sought after places and has become synonymous with Jabalpur city over the years.

The city treats its visitors with an array of lip smacking delicacies. Among them, the chaats and the Khowa Jalebies are worth a try. The chaat gali in Jabalpur is famous for different varieties of chaat in one single street. The ideal combination of a sumptuous evening would be a combination of chaats, Rabri and Khowa Jalebies of Jabalpur.

There are many a places to visit in Jabalpur for travellers namely, the Chausath Yogini Temple, Pisanhari ki Madiya, the Tripura Sundari Temple, the Duma Nature Reserve, the Bargi Dam and the Dhuandhar Falls to name a few.

The Balancing Rocks in Jabalpur, Madhya Pradesh, is a sheer geological marvel in the true sense. Located on the way to the Madan Mahal Fort, it is a rocky formation of uneven rocks which is said to have been created by volcanic eruptions thousands of years ago. Balancing rocks can be seen from the top of the Madan Mahal Fort, along with a panoramic view of the whole city. A sheer delight for nature enthusiasts, a trip to Jabalpur is incomplete without visiting the famous Balancing Rocks.

The Bargi Dam in Jabalpur is one of the important dams on the River Narmada. The Bargi Dam holds great significance as it is one of the major sources of water supply in Jabalpur and the adjoining region. Over the years, Bargi Dam has become an important tourist place in Jabalpur. The Madhya Pradesh government too has taken the initiative and opened a resort facing the dam which gives a breathtaking view of the entire dam and the reservoir. Boat ride, fishing, water-scooter are some of the facilities available which makes a trip here enjoyable. Furthermore, various birds such as mayna, parrots, cranes, pigeons and the local black sparrows visit the big water body at the vicinity of this dam. This is certainly a place you must visit in Jabalpur.

Chausath Yogini Temple is yet another place to visit in Jabalpur and it adds to the historic fervour of the city. Located near the famous Marble Rocks, the temple houses idols of 64 attendants of Goddess Durga. The hallmark of the temple is the idol of Lord Shiva at the center which is surrounded by the idols of the female goddess.

The Dhuadhar Falls is one of the important tourist place in Jabalpur. Cascading from a height of 10 mt, this is a magnificently beautiful waterfall that originated from the River Narmada. This scenic fall makes its way through the famous marble rocks, and plunges in a waterfall with heavy gush, making a roaring sound, that can be heard from a considerable distance. This sudden fall creates mist or 'dhua' and thus the waterfall is named Dhuadhar. It is a breathtaking sight and thousands of people flock at this place throughout the year. It is a wonderful place to spend a day with family and friends on a picnic.

Dumna Nature Reserve is located about 10 km from Jabalpur city. This natural reserve is a good call for nature and wildlife aficionados. Variety of wild animals can be spotted if you take a stroll into the jungle. However, this needs prior permission from the forest officials. Birds of numerous species and animals like the deer, wild boars, jackals, chitals, porcupine and monkeys can be easily spotted in the forest. A great place for kids to hangout, Dumna Natural Reserve is also a favourite spot for family outings and picnics. To make this place even better, the Madhya Pradesh Government has introduced trekking, fishing and camping in the forest. However, swimming in the Dumna Lake is strictly prohibited.

Hanuman Tal is a lake in Jabalpur that is located a short distance from the city. The lake is well maintained and preserved by the government. Hanuman Tal, as the name suggests holds religious sentiments apart from being a beautiful sightseeing destination. It is said that when Lord Hanumanji stepped on to this very place, a water body was created, and a lake was formed. From then, this very lake is known as Hanuman Tal. Hanuman Tal is surrounded by many Hindu temples and Muslim mosques. This famous lake is certainly a place to visit in Jabalpur.

Madan Mahal Fort in Jabalpur, Madhya Pradesh, stands as testimony to the lives of the rulers who ruled Jabalpur for a good number of years in the 11th Century AD. Situated at a hilltop, a short distance from the city, Madan Mahal Fort was built by the Raja Madan Singh. The fort, presently in ruins, continues to exude the aura of Rani Durgavati and her fully equipped administration and military. The main chamber of the royal family, war rooms, the small reservoir and the stable are worth a visit. The fort speaks volumes on the lives of the people of the bygone era. Madan Mahal Fort is certainly among the intriguing ancient monuments in India and is highly recommended as a place to visit in Jabalpur.

Marble Rocks at Bhedaghat is by far the most visited tourist place in Jabalpur. It would not be wrong to say that over the years Jabalpur and Marble Rocks have become synonymous with each other. The marble rocks stand tall around 100 ft on both sides of the River Narmada. Tranquility is what one would expect on a visit to marble rocks at Bhedaghat. As the sparking sunlight falls on the white and off white coloured marble rocks, it casts a shadow on the river water making it a breathtaking scene. Bhedaghat and its Marble Rocks are at their best when the beaming moonlight falls on the rocks and the river simultaneously, and a boat ride is a lifetime experience to say the least.