Nativeplanet
»
Travel guide
» Hop Around the Islands in Andaman

Hop Around the Islands in Andaman 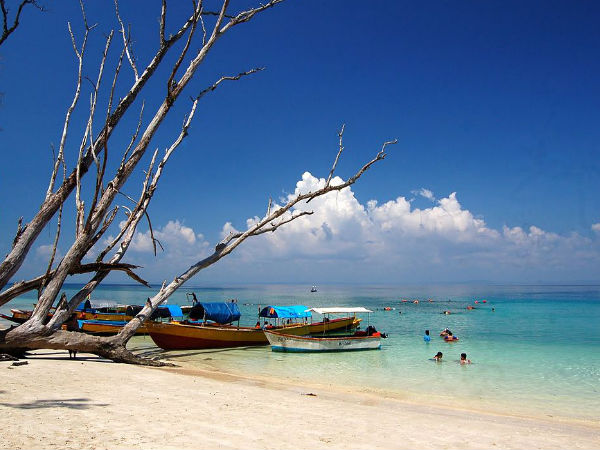 Andaman and Nicobar Islands are best known for coral reefs and beautiful beaches. It is also an important historical place because it was a prominent British colony.

Cellular Jail in Port Blair held many Indian freedom fighters as prisoners. Since the land was far and deserted, British used the whole island as a sort of jail.

Islands in Andaman is mostly covered by thick forests and many parts are still inhabited by tribes. Today it has become a prominent part of tourism and the nature just welcomes the visitors.

There are many places to visit in Andaman that are developed for tourism, but most part of Nicobar Islands is not accessible for tourists. It is still unexplored and no one is allowed to visit Nicobar.

However, some islands in Andaman are known for water sports and eco-tourism. Hence, Andaman is one of the famous tourist places in India.

The best time to visit Andaman is from December to January or Mid-March to May. Since, many islands have to be reached by ferries, climate matters a lot. Monsoon is from June to September and post-monsoon showers continue till the beginning of December. Tourism is not possible during rains.

Even the water sports are season specific and closed when there is heavy rainfall or wind.

Island hopping in Andaman is a best way to explore this enchanting region!

Port Blair is the capital of Andaman and Nicobar Islands. It is the largest and a popular town in Andaman Islands.

Historically, it was a colony of British and Port Blair was a major settlement.

Ross Island was once a stronghold of British. Today, it is in a ruined state and one can find deserted buildings of British era.

Ross Island was evacuated in 1941 after an earthquake.

Still, Ross Island near Port Blair is a unique beauty, one can look around this historical place.

Ferry ride from Water Complex (Port Blair) will take you to the Ross island which has the Bakery, the old Andaman House, Church, the Government House etc.

A visit to this deserted island in Andaman will be interesting.

Neil Island is a less crowded and serene place. It can be reached through a two-hour ferry ride from Port Blair.

The nature of Neil Island is unpolluted and is away from the bustle of the city.

There are some calm and less populated beaches like Laxmanpur beach, Sitapur beach and Ramnagar beach. The entire island can be covered in a short time.

One can also stay in the resorts in Neil Island, also try snorkelling and scuba diving.

Ferry rides are cancelled if the weather is not suitable, otherwise it is a pretty good place to visit in Andaman and Nicobar Islands.

Radhanagar Beach, Elephant Beach and Kala Pathar Beach are some of the famous beaches in Andaman.

One can also try water sports such as snorkelling, scuba diving, etc. in Havelock Islands.

It is one of the big islands in Andaman and Nicobar. Tourists should be aware that water sports are weather specific, they're closed in the off season. One can do different activities in this beautiful island.

Baratang Island is 95 km from Port Blair; tourists can take bus or ferries to reach.

This place is known for Mud Volcano, Parrot Island and Limestone caves. Baratang is also called as gateway to North Andaman.

It is advisable to go on a conducted tour with a local guide. Baratang is inhabited by tribes and one should be careful when you visit this place.

Tourists are advised not to take pictures of the tribes because earlier there have been instances of tribal people attacking the tourists.

Ross and Smith Island is near Diglipur in North Andaman. It is known for the Saddle Peak, the highest peak in Rictchie's Archipelago.

It is a very beautiful place with beaches and Saddle Peak National Park. It is also known for Mangrove creeks and picturesque views.

One can reach this island through Diglipur or Port Blair.