Nativeplanet
»
Travel guide
»International Destinations: Has Summer Tourism In Greece Bounced Back Amid The Pandemic?

International Destinations: Has Summer Tourism In Greece Bounced Back Amid The Pandemic? 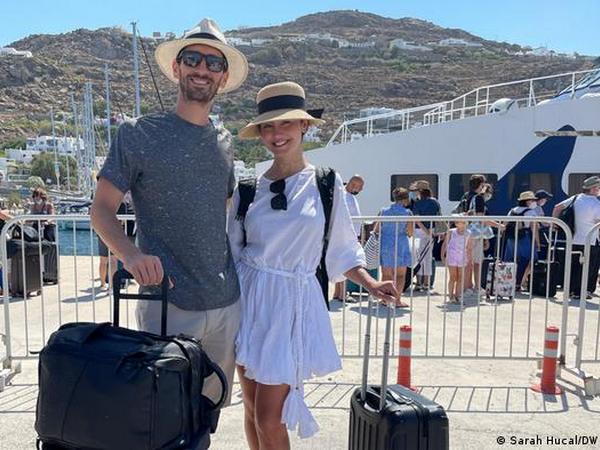 In Greek, the word for vacation-diakopez (διακοπές)- literally translated means "interruption." What a fitting term to describe my trip to the sun-soaked Cycladic islands in the summer of yet another seemingly endless pandemic year.

Freshly vaccinated, I was armed with new confidence when I first arrived in Greece in early July to visit several islands during the summer. The ferry from Athens to Paros, a bucolic island popular with young partygoers and Athenians, felt packed although most ferries were operating at 80% capacity due to COVID regulations. Mask wearing and the 1.5 meter (5 ft.) social distancing rule, although obligatory, were not really evident. Before boarding, passengers were required to fill out a health questionnaire stating they had either been vaccinated or had been tested for COVID. Although I carried my vaccination certificate with me, on the dozens of ferry trips I took with various boat companies, I was never asked to show it.

When the boat docked in Paros, organised chaos ensued as travelers exited en-masse in a flurry of luggage, motorbikes and cars. But none of this bothered me. How could it? Returning to Greece, which I visit regularly, felt triumphant after an anxiety-filled pandemic year.

Better Than 2020 - Still Not Good Enough

This year, I returned to Paros for several days - an island that won me over for it's stunning waters when I first visited last summer. I found Stavros Dreveles, the owner of Hotel Mary who picked me up from the ferry to take me to his hotel. He was in high spirits as we waited in traffic to leave the parking lot, optimistic about the upcoming summer season. Thus far, the season had been busier than ever thanks to the higher than usual number of Greek tourists who had booked his rooms.

"It's been a hard year, so, of course, everyone needs a vacation," he explained. "Last year we had absolutely nothing, business was 70-80% down. We got a little bit of help from the government but it wasn't enough to pay rent for the winter," he lamented.

The summer of 2020 saw a 78% drop in tourism from a record 34 million tourist arrivals in 2019 - a disaster for the country's already struggling economy, in which tourism accounts for 20%. Millions of workers rely on the summer income to get them through the winter.

This year, Greek prime minister Kyriakos Mitsotakis seemed determined to see summer tourism make a comeback, despite Greece's consistently high COVID case numbers and the sluggish pace of vaccinations. But it hasn't been an easy summer in Greece - added to the challenges of the pandemic, wildfires in August also devastated parts of the country, particularly Evia and villages around Athens, further deterring tourists from visiting.

While visiting the leafy village of Lefkes, I struck up a conversation with Lauren Van Horn and Hannah Birch, who live in Dubai but hail from the US and England respectively. They told me how they had been left lost in the labyrinth of rules required to enter Greece, which are now common during pandemic travel.

"We had done so much research on so many different countries it just blurred into one and we completely forgot about the 'Passenger Locator Form' and had to delay our flight by a day," Hannah told me. The form is required for foreign travelers entering Greece, and must be filled out online at least 24 hours before the flight. Travelers then receive a QR code which they have to show before boarding the plane.

Despite this set-back, the women were happy to be in Greece where they could combine remote work and travel while island hopping. "We chose Greece because as we're fully vaccinated we could come here," Lauren told me. "I also wanted to be somewhere I wouldn't mind getting stuck if the borders closed."

Greece was one of the first European countries to open to tourists outside the EU, who have been fully vaccinated two weeks prior to entering the country, or who have taken a PCR or rapid test within a specified period of time.

As the summer progressed, the number of COVID-19 cases continued to rise. By July 30, 2021, many of Greece's most popular tourist destinations, including Mykonos, Santorini and Rhodes were marked "dark red" on the COVID-19 map by the European Centre for Disease Prevention and Control, meaning all non-essential travel was discouraged.

But not all travel-hungry tourists from outside the EU were discouraged - first and foremost American tourists. While on a boat layover on the island of Mykonos I met an American couple from New York. Taylor Fox and Alina Bero had made use of their work flexibility to take a trip around Europe, first visiting Italy, then island hopping in the Cyclades before a stint in France.

Fox said he could understand that travel in pandemic times, due to the necessity for travellers to do their research before venturing off, was not suitable for everyone: "The rules change all the time - for our Italy flight we had to be COVID-19 tested several times within a 72 hour time frame - that requirement has since changed. I can see how that would make many people from the US cautious to come to Europe right now," he told me.

The couple did enjoy encountering fewer tourists on the islands - making the pandemic feel far away. "We both had COVID and we're also both vaccinated, so honestly it's kind of in the past for us in our minds. Nothing has felt very crowded in Greece," Bero added.

Nightlife Curbs On Many Islands

I was curious to know how the season was going on the popular Cycladic island of Santorini, and caught up with Kostas Sakavaras, a tour guide I worked with last year while shooting a travel video for DW in late June, when the island was apocalyptically empty.

"I'm less busy than usual, I do only 4-5 tours a week whereas normally I would be doing 10-12," Sakavaras said. Before the pandemic, up to 2 million tourists visited the island each year.

Fewer cruise ships are also docking in Santorini this year, which means fewer day trippers coming. "This is not necessarily a bad development, to be honest," Sakavaras pointed out. The island had already capped cruise ship numbers in 2019 in an attempt to avoid overtourism.

Many islands have also faced curbs on nightlife this summer. On Mykonos, known as the party island of the super-rich, a nighttime curfew was imposed on July 17, restricting movement between 1 a.m. and 6 a.m. after what government officials called a "worrying outbreak" of COVID-19 cases on the island.

The mayor of Mykonos, Konstantinos Koukas, complained that imposing these measures during the height of the tourism season was misguided, writing on Facebook that "the only thing this will achieve is that visitors will go to another island." The restrictions were then lifted on July 26.

Other islands, including Zakynthos in the Ionian island group and Chania on Crete, also banned live music. Many Greeks I spoke to lamented that for the second year in a row, panygiria - local festivals with dancing and traditional music outdoors - were not allowed to take place.

And while many islands appeared to be bustling in July and August, earlier this year, the Bank of Greece said it would take two to three years for travel and spending to return to the record levels of 2019, which brought Greece 18 billion euros in revenue. It forecast this year's revenues would be 40% of those of 2019.

By mid-August 2021, the Delta variant accounted for 90% of Greece"s growing number of COVID-19 cases, as vaccine skepticism remained high and whispers of new restrictions in the fall were on the minds of many vacationers I met. Although I have immensely enjoyed this "interruption" on the Cycladic islands, I can't help but ponder what the future holds for Greece's tourism industry - and for all of us - as the summer begins to wind down.

Photos and Text by DW News