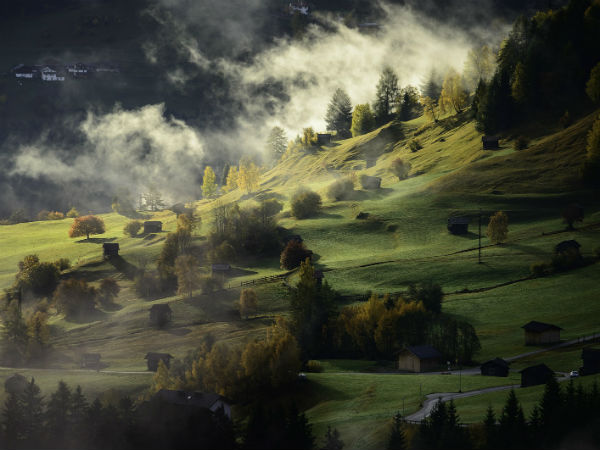 The summer fervour subsides and the petrichor admixes with the misty air in July, which brings much-required relief to the travellers and tourists who're on their quest to savour the monsoon weather in South India in July. From the invigorating green sceneries to cascading cataracts, and from the mist-covered valleys to the breezy road routes, here's a list of 10 incredibly scenic places to visit in South India in July 2020. Have a look!

Settled in the occidental region of Karnataka, Chikmagalur is one delightful hill station that owes much of its notoriety to the coffee plantations, Baba Budan Giri highlands, and its soothing weather. Comprising of vast and refreshingly verdant panoramas, Chikmagalur by far is one of the incredibly scenic places to visit in South India during July which is yet to be traversed by travellers.

Assuredly, Alleppey is one of the best monsoon hotspots to tour in South India in July that needs neither marketing gimmicks nor an introduction to those who call themselves as nature adorers. Bestowed with natural backwaters and lush greenery all around, Alleppey is renowned for its backwater cruising in a roomy houseboat which is a must experience when in Kerala during monsoons.

Set in the heart of Trivandrum district, Poovar one of the naturally blessed places to visit in July in South India. Being the second last place which marks the end of the coastal state of Kerala, Poovar is an exquisite local town that serves as a perfect getaway for those who seek to escape to a natural retreat.

Chances are high that most of you didn't know till now that such a place exists in India. Located in the northern region of Karnataka, Sirsi is one of the best monsoon destinations to visit in July in South India and famed for its peaceful vibe and dense forests which are encompassed by many cascading waterfalls.

Perched high at a height of 5,200 ft., Munnar is one hill station which is renowned for its rejuvenating environs and its tea plantations. Located in the Idukki district of Kerala, Munnar happens to be one of the best honeymoon places to visit in July in South India as well due to its natural charm and stunning attractions.

Popularly known as Udhagamandalam or Udhagai, Ooty remains one of the top romantic places to visit in South India in July. Much famed for being a host to the annual flower show in the Botanical Gardens, and the Nilgiri Mountain Railway, Ooty is the most celebrated hill stations in the heart of Tamil Nadu

Comments
Read more about: south india july
Other articles published on Jul 1, 2020
We use cookies to ensure that we give you the best experience on our website. This includes cookies from third party social media websites and ad networks. Such third party cookies may track your use on Nativeplanet sites for better rendering. Our partners use cookies to ensure we show you advertising that is relevant to you. If you continue without changing your settings, we'll assume that you are happy to receive all cookies on Nativeplanet website. However, you can change your cookie settings at any time. Learn more
Change Settings Continue