Hoysaleshwara Temple: A Canvas of Dreams 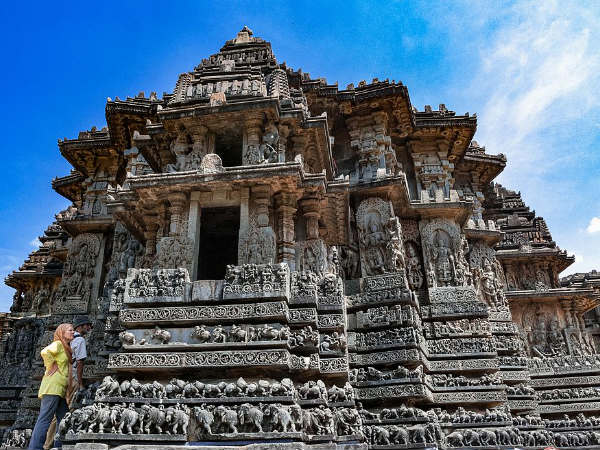 Looks like the artists got so excited that they created a utopian world out of Hoysaleshwara Temple in Halebidu! Each corner and piece of the wall is drowned in art and history. What began as a competition to Chennakeshava Temple at Belur, became one of the masterpiece structures of Hoysala empire.

Today, Hoysaleshwara Temple dazzles as a monument in Hassan. This grand venture of Hoysala King Vishnuvaradhana took almost 30 years to complete. It has seen glorious times as well as worst period when it came under the attack of Muslim invaders. Fortunately, the shrine is in a good condition even after so many years.

What to Observe in Hoysaleshwara Temple?

Hoysaleshwara is like an open art gallery! Visitors will have so many exciting things to observe here. The majestic temple looks exotic and rich in sculptures.

Basically, the interiors have been kept simple and elegant. So, except for the beautiful pillars and intricate friezes you won't have much to see. Lord Shiva with his mount Nandi are seen in the inner sanctum. However, don't miss out on the carvings of elephants and other animals which look picture perfect in the shrine. Though there are numerous animal carvings, not one is similar to the other. Such is the versatility that will strike us at Hoysaleshwara Shrine.

Further, the shrine has dvikuta vimana ( 2 shrines); as per the history, one shrine was for the King Vishnuvardhana Hoysaleshwara and another was for the Queen Shantala Devi, named as Shantaleshwara shrine. Though temple towers have been destroyed during the invasion, it is believed to have been an integral part of the temple.

More than the interiors, one should look at the exterior walls of the shrine. The big effigies of Dwarapalakas (guards) next to entrance doors, idol of dancing Ganesha, carvings of maidens, different kinds of creatures, gods and goddess adorn the temple walls. This luxurious soapstone structure is constructed on a large scale and reflects the charm of those ancient times.

Around the Temple
Photo Courtesy: Anks.manuja

Another interesting aspect is the Garuda Stambha (Garuda Pillar) in the premises. Garudas were the protectors of the Kings and Queens. Ancient texts have mentioned that Garudas used to commit suicide after their master's death. Such is the role they played in the lives of Kings. Garuda Pillar at Hoysaleshwara Temple is unique and interesting.

Thus, Hoysaleshwara Temple is one of the most prominent temples in Karnataka. The talent and craftsmanship of Hoysala Empire mirrors in each chiselled forms of the temple. Don't miss out on visiting this age-old shrine that takes Hoysala architecture to a different level.

How to Reach Halebidu