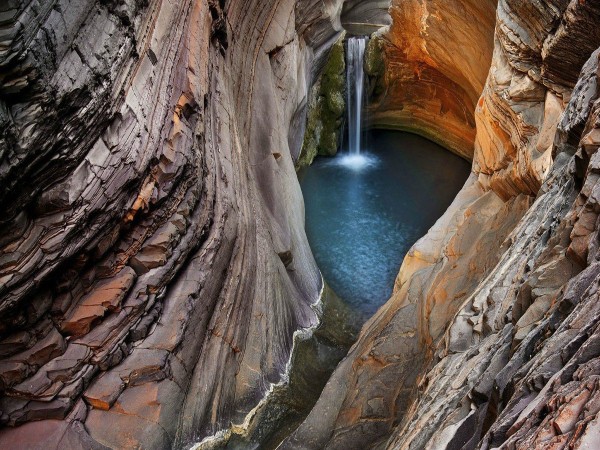 Terrifyingly steep-side gorges slice through the barren hills and plateaus of the Hamersley Range in Western Australia. Three of the most spectacular of the 20 major gorges are the crevice-like Hancock, Joffre and Weano Gorges, which converge and join the equally narrow Red gorge.

In places, the gorges are so narrow that from the bottom all that can be seen is a tunnel of dark rock. At its narrowest point, Weano Gorge is hardly a yard (1m) wide. Equally spectacular in its narrowness is Oxer's lookout. This sliver of land separates Weano and Hancock gorges, and cliffs fall away precipitously on both sides. At the head of the 4 miles 6km) long Joffre Gorge, the vertical walls curve round to form a natural amphitheatre - the site of the waterfall after heavy rain.

Palms In A Parched Land

The rocks of the Hamersley Range were laid down on the seabed 2500 million years ago. Layers of sediment - some rich in iron - were compressed by layers above and the whole block was then raised above sea level. It has been corroding away gradually ever since with streams cutting down through the layered rocks to form the deep gorges.

High up on the parched plateau, only low clumps of hard-leaved porcupine grass and mulga trees can withstand the fierce heat and lack of rain, and on the cliffs, a few white-trunked snappy gum trees cling in the crevices.

Yet far below, the gorge floors are green with palms, eucalyptus gum trees and ferns, in the shade cast by the steep gorge walls, less water is evaporated away than in the searing heat of the plateau, so water left by the last river flow remains in pools.

Like oases in the desert, these splashes of green add even more colour to the vivid landscape.