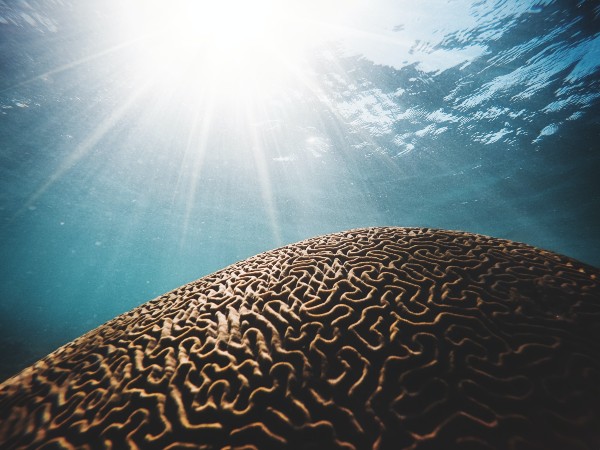 Considering that it is one of the planet's loveliest ornaments - a jewel of azure, indigo, sapphire and purest white whose glories are apparent even from the moon - it seems strange that the first Europeans to see the Great Barrier Reef should have been so sparing in their descriptions. Most, of course, were seamen who had other things on their minds than the beauties of nature.

In 1606 there was the Spaniard Luiz Vaez de Torres, storm-driven round the tip of Queensland and through the strait now named after him. There was Captain Cook, whose HMS Endeavour was trapped and badly holed between the outer reef and the mainland in 1770.

And there was Captain Bligh who, in 1789, brought his boat land of starving Bounty loyalists through the reef's breakers to the calm waters beyond. Joseph Banks, the Endeavour's botanist, was awed by the place. After the ship had been repaired, he wrote: 'A reef such as we have just passed is a thing scarcely known in Europe, or indeed anywhere but in the seas.

It is a wall of coral rock, rising perpendicularly out of the unfathomable ocean'. Although coral requires shallow, sunlit seas to thrive, Banks was right in proclaiming the uniqueness of the Great Barrier Reef. Running some 1260 miles (2030km) along the edge of the continental shelf of north-eastern Australia, it is the largest living entity on earth.

Partly, it is grouped about real islands, actually the summits of the long-drowned mountain range. But its extraordinary richness comes from its 3000 coral reefs, islands, cays and lagoons, all at different stages of development. The reefs are the product of 10,000 years of labour, during which the ocean rose to its present level after the last Ice Age.

The engineers of this stupendous undertaking are millions of tiny coral polyps - some 350 different species of them. They are related to jellyfish and each has a mouth surrounded by a ring of tentacles on top. Each polyp can draw calcium carbonate from the sea and turn it into a casing of limestone that, multiplied by billions, forms the reef.

But the polyp must share its limestone shelter with minute plants called zooxanthellae, which use light to convert carbon dioxide and water into carbohydrates and oxygen. These the polyp absorbs, presenting the plants in exchange with nitrates and other waste products. So coral reefs can grow only where sunlight can reach - in clear water up to about 130ft (40m) deep.

Altogether, the Great Barrier Reef is one of the world's most vigorous and best-integrated ecosystems. But it is also one of the most delicately balanced. Pressures on a stage aspect can have disastrous effects upon the whole. The reef can take storms and the sea's rages in its stride, but now, in the 21st century, its greatest dangers are those induced by modern man. Aborigines fished and hunted along the reef for centuries without damaging it. But in the past 100 years, guano (bird dung) diggings, overfishing, whaling, trade-in beche-de-mer (dried, smoked sea slugs) and hunting for mother-of-pearl, have left scars.

Declaring the area a National Park and World Heritage Area has put a stop to many dangers, and tourism is strictly controlled. Even so, some scientists blame resort sewage for an explosion in the crown-of-thorns starfish population, and hotel food scraps dumped in the sea led to an increase in gulls and a dramatic rise in predation on baby turtles.

The run-off of phosphate-based fertilisers from sugar cane fields into the sea is another large threat to the reef. In order to protect this exceptional area, no action is too small to help ensure that the Great Barrier Reef can continue on with its timeless affairs.

Comments
Read more about: india
Other articles published on Jul 6, 2022