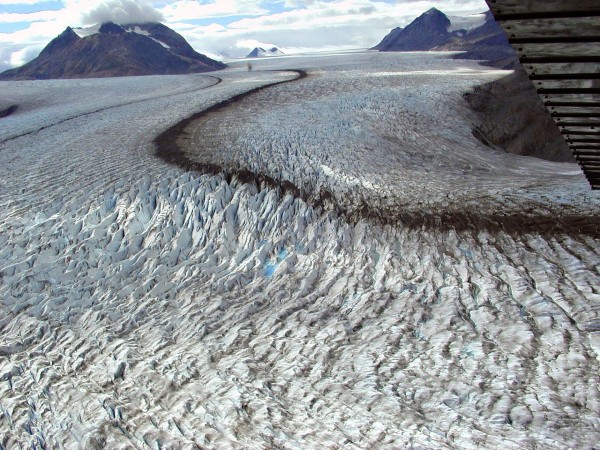 Every summer's day in Glacier Bay resounds to the crash and splash of falling masses of ice, some the size of buildings. They are breaking off from the towering walls of ice that meet the frigid waters of the bay, which lies off Icy Strait in the Gulf of Alaska. Slowly the land is sloughing off its icy shell to reveal bare rocks, and plants and animals are reclaiming territory lost to them during the 'Little Ice Age that began about 4000 years ago.

When the British navigator Captain George Vancouver of HMS discovery visited Icy Strait in 1794, Glacier Bay did not exist. He saw only the end of a massive glacier - an ice wall over 10 miles (16km) long and 300ft (100m) high. But when John Muir, the American naturalist and writer, arrived 85 years later, he found an extensive bay. The ice had retreated inland some 48 miles (77km) towards the mountains.

Now, in what has become the Glacier Bay National Park, ice-gouged fringes fall on the green waters of the fjords, and of the intensely white, far-spreading fields of ice. He described the unearthly splendour of the dawn, appearing as a red light burning on the topmost peak. 'The glorious vision passed away,' wrote the entranced Muir, 'in a gradual, fading change through a thousand tones of colour to pale yellow and white.' Such scenes can still be seen today as the glaciers crack and groan their way down from the icy heights.

In summer, meltwater thunders deep within them, carving out caves and tunnels that eventually collapse with a deep rumble when the melting ice is too thin to span the voids. For the last few centuries, winter snowfall has not matched the summer melt, so the glaciers are retreating and combining this with the effect of global warming, the speed at which the glaciers are retreating increasing. However, the retreating ice does allow scientists to study the sequence of returning life.