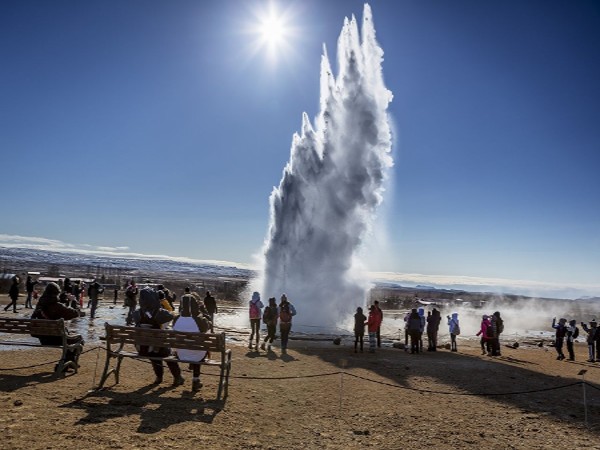 Water seething and exploding in a boiling basin, followed by a jet of chalk-white spray shooting up to the height of a five-storey house - a magnificent sight that continues for seven or eight minutes before subsiding. Then, suddenly, a column of boiling water again shoots rocket-like into the air, this time 100ft (30m) or more, and is carried by the wind in a great fan. The eruption continues, the fountain working itself higher and higher - even to 200ft (60m). Finally, there comes a column of scalding steam, pouring out with a mighty roar, and all is quiet again.

This was Geysir hot spring in action in the 1930s when it was Iceland's prime attraction - the original 'geyser', or 'gusher'. Now visitors are more likely to see a performance by its smaller neighbour, Strokkur, which boils over every ten minutes or so, blasting out a 70ft (22m) column of boiling water.

Geysir and Strokkur lie in a wooded valley, an area of some 50 hot springs that can be heard boiling underground with a far-off grumbling sound.

The geyser area was first mentioned in 1294, when an earthquake destroyed several hot-water springs and created two others, probably Geysir and Strokkur. Geysir became a tourist attraction almost as soon as it was named in 1647. At that time it erupted daily.

Around 1800, Geysir was spouting several times a day, and once erupted 14 times in 24 hours. In 1907, however, it became dormant for almost 30 years. In 1935 eruptions were induced artificially by draining off some water and thus lowering the pressure below. Now it explodes only rarely, but its blasts are still as spectacular as ever.

As well to Geysir and Strokkur, there are some 3000 hot springs, steam vents, mudbaths and geysers in Iceland. They include the boiling, sulphurous mud pits at Namaskard in the north, where visitors have to watch where they tread to avoid getting burnt feet. In modern Iceland, the natural hot water from volcanic heat is harnessed for heating houses.

A dramatic display of the area's unceasing turbulence occurred on November 14, 1963, when a cloud 12,000ft (3600m) high billowed from the sea off Iceland's south coast. Not a spouting geyser, but the birth of a new island - Surtsey. Another Iceland in miniature was built from the debris of a volcanic eruption under the sea.