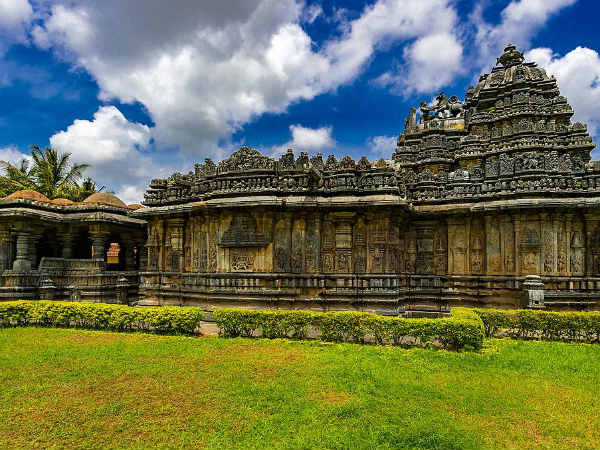 The ruling seat of the Hoysala Empire during the Medieval Period of India, Hassan is one of the largest districts in Karnataka and is immensely popular amongst tourists for its ancient monuments, especially temples, and other religious sites. The district has derived its name from Goddess Hasanamba, who is the presiding deity of the region.

As per records, the history of Hassan dates back to the Hoysala Empire when it was at the peak of its development and success. Later on, it was ruled by several other dynasties, which include the Vijayanagar Kingdom and the Mughal Empire.

Hence, you can find a lot of historical monuments within its boundaries reflecting the legends of the past. However, most of the popular tourist spots include architectural wonders from the Hoysalas era in the form of temples. So, let's move on and learn more about these eye-catching temples in Hassan which are instances of fine artistry.

An indubitable beauty, Bucesvara Temple is located at a distance of about 10 km from the city centre in a small hamlet named Koravangala and is one of the masterpieces created during the era of the Hoysalas. The temple was built during the early 12th century by Buci, an officer of the Hoysala army, in order to honour the coronation of the king.

There are two other temples located in its vicinity, which are believed to have been constructed by Buci's brothers. All these temples certainly showcase the beauty of the architecture that prevailed during those times, considering the use of intricate patterns and beautiful designs on the walls and pillars of the temples.

Today, the temple is under the care of the Archaeological Survey of India and is visited by thousands of tourists, especially history lovers. The presence of lush greenery surrounding the temple helps in maintaining a natural environment.

Located in the town of Belur at a distance of about 35 km from the city of Hassan, Chennakeshava Temple, unarguably, is one of the most visited temples in the Hassan district. Dating back to the 12th century, the temple was constructed on the orders of the Hoysala King Vishnuvardhana.

However, it took a long period, about 103 years, to complete the construction. Dedicated to Lord Vishnu, this temple has been mentioned in several ancient texts and hence, it is considered as a significant pilgrimage site amongst Hindus. As the temple is located on the banks of Yagachi river, the climate of the temple compound remains relaxing and favourable.

Regarding the architecture, the temple also boasts of its appealing structural formation, which comprises patterns, carvings, statues, inscriptions and reliefs depicting the usual life of the people from the Hoysala Empire. You should not miss this wonderful temple once you are in and around Hassan.

Another masterpiece from the past, Lakshmi Narasimha Temple is located at a distance of about 40 km from Hassan in a small village named Javagal and dates back to the 13th century. Like others, this temple also belongs to the era of the Hoysalas and hence, is known for its brilliant architecture. Dedicated to Lord Narasimha, an incarnation of Lord Vishnu, Lakshmi Narasimha Temple is built on a raised platform with three shrines of equal sizes and is adorned with reliefs, sculptures and friezes.

Even though there is not much to explore except the beauty of its exemplary architecture, it is still visited by thousands of history lovers and locals every year. Once you find yourself within the boundaries of this temple complex, you will certainly get lost in time; such is the aura of this historic beauty.

Kedareshwara Temple is one of the most popular temples in Halebidu, the later capital of the Hoysala Empire after it gets shifted from Hassan during the early 12th century, and is dedicated to Lord Shiva. Built out of soapstone, this marvellous temple is like other temples in the list, as it is built over a raised platform and consists of three shrines.

However, the patterns and designs carved on its walls and pillars are different from other temples. Surrounded by a beautiful garden, the environment of Kedareshwara Temple can certainly relax your nerves. So, how about visiting this masterpiece and exploring its history this season?

The most famous of them all, Hoysaleswara Temple is located in Halebidu at a distance of about 30 km from Hassan and is another temple commissioned by the Hoysala King Vishnuvardhana. Dedicated to Lord Shiva, the temple dates back to the early 12th century and hence, it is also one of the oldest temples built during the Hoysala Empire.

Even though the temple is in ruins today, as it was looted by several Muslim invaders in the past, it is still one of the most visited temples in Karnataka and hence, is a must-visit monument for every history lover and architecture enthusiast. So, how about planning a tour of this incredible artwork now?

Comments
Read more about: india travel tourism temples karnataka halebidu hassan
Other articles published on Jul 4, 2018
We use cookies to ensure that we give you the best experience on our website. This includes cookies from third party social media websites and ad networks. Such third party cookies may track your use on Nativeplanet sites for better rendering. Our partners use cookies to ensure we show you advertising that is relevant to you. If you continue without changing your settings, we'll assume that you are happy to receive all cookies on Nativeplanet website. However, you can change your cookie settings at any time. Learn more
Change Settings Continue