Explore The Pristine Beauty Of Sagara 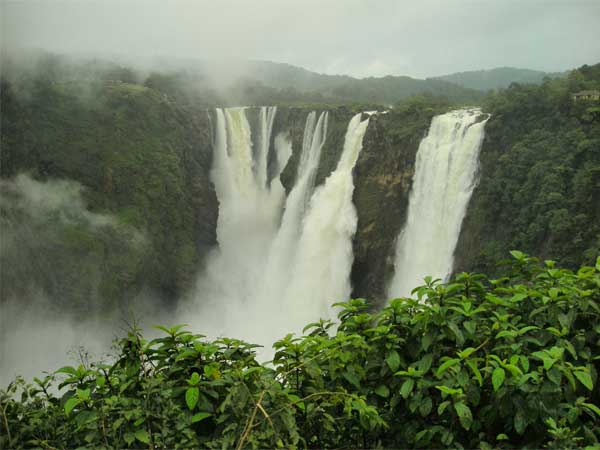 The city of Sagara is located roughly 360 km from Bangalore, Karnataka. It has the state's beloved Jog Falls in its proximity, along with a number of other places of attraction. Sagara is a name derived from Sadashiva Sagar, which used to be the name of the city's lake. It is a man-made lake built between Keladi and Ikkeri, by Sadashiva Nayaka of the Keladi dynasty. The lake is now known as Ganapathi Lake.

Sagara is home to a large number of Gudigar families. Gudigars have a legacy of making beautiful sandalwood and ivory artefacts. However, beetle nut crops bring majority income to this city.

October to April are the best months to visit Sagara. Since summer tends to get very hot and humid, the winter months are ideal to visit, when the temperature stays pleasantly low.
PC: Vmjmalali

Routes From Bangalore To Sagara

Read further to know about the places to see on the way to Sagara.

Located in the village of Yediyur in Kunigal district, it is an ancient lingayat temple dedicated to Sri Siddhalingeshwara. He is believed to be the reincarnation of Lord Shiva. The tomb of this famous saint belonging to the 15th century lies in the temple.

A small shrine of Veerabhadra Swamy is installed in the basement of the temple.

Most of the temples found on the way from here belong to the heritage of Hoysala Dynasty.
PC: Akshatha Inamdar

The town of Turuvekere is located 124 km from Bangalore and 32 km from Yediyur village. Turuvereke was established as an Agraharam town (a place of learning). It houses a number of beautiful temples built by the artisans of Hoysala era. Some of which are the Gangadhareshwara Temple, Beterayaswamy Temple, Chennigaraya Temple and Moole Shankareshwara Temple.

Built in the 13th century by King Narasimha III, Moole Shankareshwara Temple is a magnificent structure dedicated to Lord Shiva. It is a perfect example of the Hoysala architecture.
PC: Mayasandra

Arsikere is situated 55 km from Turuvekere. The name Arsikere literally means "Queen's Lake", since it is believed that a princess of Hoysala Dynasty built a lake near the town. This town also houses many popular temples, of which, Ishwara Temple and Malekal Tirupati Temple are the two major places of tourist attraction.

The Ishwara Temple is dedicated to Lord Shiva. It is considered to be one of the most elaborate structures created in the legacy of Hoysala architecture. The temple has a 16-pointed star shaped hall or Mantapa, along with a shrine of asymmetrical star shaped hall.
PC: Dineshkannambadi

Chikka Tirupati or Malekal Tirupati Temple, is located just 4 km from Arsikere. It is dedicated to Lord Vishnu and is built in the Dravidian style of architecture. The temple is similar to the Tirupati Venkateshwara Temple at Andhra Pradesh, hence the name Chikka Tirupati (Chikka means small or miniature).
PC: Ssriram mt

Located 70 km from Arsikere is the village of Amruthapura in Chikkamagaluru district of Karnataka. It houses the Amruthesvara Temple, another relic from the Hoysala Dynasty, built under the rule of King Veera Ballala II. The temple is filled with fantastic wall reliefs which display the intricacies of the architecture.
PC: Dineshkannambadi

Earlier known as Benkipura (translates to ‘the city of fire'), Bhadravathi derives its name from the river Bhadra that flows through the city. It is located 25 km from Amruthapura.

Bhadravathi also houses an array of temples, of which, Lakshmi Narasimha Temple is the famous one. Built in the 13th century in Hoysala architectural style, the temple is dedicated to Lord Vishnu.

98 km off-route from Bhadravathi will take you to Bhadra Wildlife Sanctuary.
PC: Dineshkannambadi

Situated 21 km from Bhadravathi, Shivappa Nayaka Palace is a quaint two-storied building, named after the popular King, Shivappa Nayaka. He was an outstanding ruler of the Keladi Nayaka Dynasty.

Although named after the King, some archaeologists believe that it was built by the ruler Hyder Ali in the 18th century. Numerous articles of Hoysala period such as sculptures, stones and inscriptions are on display in the palace.

The town of Ikkeri is located just 6 km from Sagara. It was the later capital of the Keladi Nayaka Dynasty. The name Ikkeri literally means "two streets". Although the town has lost quite a bit of the Keladi dynasty's heritage, Aghoreshwara Temple built in their reign still exists.

Honnemardu is a village that overlooks the Linganamakki Reservoir, which is formed from the backwaters of river Sharavathi. A small island rests in the middle of this reservoir, where camping is allowed. Water sports such as coracle rides, kayaking and canoeing are also available here.

The reservoir is a pristine water-body surrounded with lush green forests, a clean and well-protected region. Therefore, make sure to be careful and not dirty the surroundings when you camp.
PC: Lensman vishy

Located just 20 km from Honnemardu is Karnataka's most popular touring destination, the Jog Falls. Not only is it the second-highest plunge waterfalls in India, the Jog Falls is also ranked 11th among the World's 100 Highest Rated Waterfalls!! The view of gushing Jog waterfalls is nothing short of a miraculous sight!

The water falls from a height of 830 ft and depending on the amount of rainfall, it becomes a plunge waterfall. So the best time to visit Jog falls is during the monsoon months of June to September, when the falls is gushing out water.
PC: Shuba

Spread across the river Sharavathi, the Linganamakki Dam is located 6km from Jog Falls and is one of the major dams of Karnataka. It was built in 1964 by the Government of Karnataka.

The dam receives most of its water from rains and reservoirs of Chakra and Savahaklu, which are connected to the dam through canals. The best time to visit the dam, therefore, is during monsoon.
PC: Cameron Kay

If you are left wanting to visit more awe-striking falls, then fret not! Dabbe Falls is located near Hosagadde, just 25 km from the Jog Falls. Although, the Dabbe Falls is not as huge or tall as Jog Falls, it's a sight worth witnessing nevertheless!

This place is every trekkers' delight, since the waterfalls can be reached only through 7-9 km of trekking. The trail of this trek is through a beautiful thicket of forest and happens to be quite challenging.

The final kilometre of the trek is a notch higher level of difficulty, since the trail inclines almost 80 degrees downwards with no defined steps or roots to place your foot on.
PC: Manu gangadhar

Sharavathi Wildlife Sanctuary has rich vegetation which is sustained by the river Sharavathi. It is home to animals such as jackal, black panther, tiger, sambhar, otter and more. The Lion-tailed Macaque is an endangered species, which is also found here in the sanctuary.

It is also a great spot for birdwatching since it is home to birds such as Lorikeets, Blue-throated Barbets, Woodpeckers, to name a few.

Water sports such as kayaking and canoeing are possible in the backwaters of the sanctuary.
PC: Prakashmatada