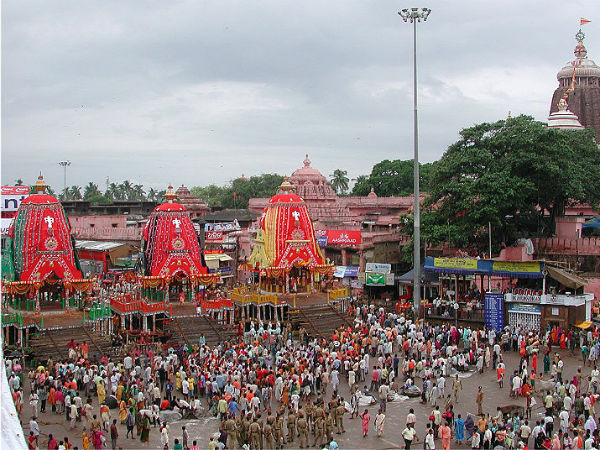 Mythology forms a firm backbone to the culture in India There are a large number of tales and narrations that relate to Hinduism in the ancient religious texts such as the Puranas, Vedas and the epics of Mahabharata, Ramayana and Srimad Bhagvad Geetha.

This year this grand festival of Odisha, is set to take off on 25th June 2017.

Why Is It Celebrated?

The Rath Yatra or the Festival of Chariots at Puri is a major festival which is dedicated to Lord Krishna, who is known as Jagannath, along with his siblings Balabhadra or Balarama, his elder brother, and his younger sister Subhadra. Jagannath in translation means the Lord of the Universe and he is also worshiped in the same manner here in Puri.

The Rath Yatra, marks Lord Jagannath's visit along with his siblings Balabhadra and Subhadra to the temple of Gundicha. The rath(chariot) of Jagannath stops at the temple of Mausi maa temple (that is seen as their maternal aunt's home) to relish on a meal of sweet pancakes which is believed to be the favorite dish of the Lord.

The Chariots Of Rath Yatra

The three chariots of Balabhadra, Subhadra and Jagannath are newly constructed every year with wood procured from a certain kind of tree.These woods are customarily brought from the erstwhile princely state of Dasapalla by a team of specialized carpenters, who have the hereditary rights and privileges for the same.

The chariots that are decorated as per the unique scheme which is followed since time immemorial, stand on the Bada Danda or the Grand Avenue. The chariots are covered with red coloured cloth, which is combined along with black, yellow and blue colors. The chariots are later lined up across the wide road in front of the grand temple at its eastern entrance, known as Sinhaswara or the Lion's Gate.

The chariot of Lord Jagannath is known as Nandhighosa.W It is 45 ft tall and has 16 wheels, each of these wheels are 7 ft in diameter and is decked up with a cover made of red and yellow coloured clothes.

The chariot of Balarama is known as Taladhwaja and has a palm tree on its flag. The chariot measures 44 ft in height and has 14 wheels which measure 7 ft in diameter and is covered with red and blue coloured clothes.

The chariot of Subhadra is known as Dwarpadalana, which in translation means the trampler of pride and measures 43 ft in height. It has 12 wheels each of which measures 7 ft in diameter and is covered red and black coloured clothes. Black is traditionally associated with the Mother Goddess and Shakti.

Around each chariot, one can find painted wooden images representing different deities on the side. All the chariots are attached to four horses which differ in colours.

The dark coloured ones are for Balarama, the white ones for Jagannath and the red ones for Subhadra.Along with the chariot there also charioteers who are known as Daruka, Matali and Arjuna respectively.

Every year, the wooden idols of the deities are taken from the Jagannath temple to the Gundicha temple in grand chariots which are pulled by the devotees, who consider the chance they got to pull of the chariots as the result of the good deeds done.

On the day of the Yatra, people from all walks of life come in large numbers and surround the temple waiting for the royal heir of Odisha to perform a sacred ritual called Chhera Pahara, after which the deities are brought out from the temple to the respective chariots.

First, the chariot of Balarama is pulled out which is followed by Subhadra and then by Jagannath. The chariots are pulled by the crowd amidst the enthusiastic devotees dancing to the sounds of the conch shells, chants and the synchronized drum beats, which extend throughout the journey.

The Rath Yatra is one of the oldest festivals which is celebrated in India. The origins of the yatra traces back to time immemorial, as the festival has mentions in the Puranas.

Until a few years ago, devotees would throw themselves in front of the wheels of the chariot carrying the idol of Jaganath as many believed this would bring them salvation. As of now this practice as has been discontinued.

The chariot festival is a very important event in the country. and it is looked upon by millions of pilgrims and tourists from across the globe. Head to Puri on this 25th June to experience this marvellous festival filled with energy and faith.

Comments
Read more about: travel india festival temples religious travel odisha puri
Other articles published on Jun 23, 2017
We use cookies to ensure that we give you the best experience on our website. This includes cookies from third party social media websites and ad networks. Such third party cookies may track your use on Nativeplanet sites for better rendering. Our partners use cookies to ensure we show you advertising that is relevant to you. If you continue without changing your settings, we'll assume that you are happy to receive all cookies on Nativeplanet website. However, you can change your cookie settings at any time. Learn more
Change Settings Continue