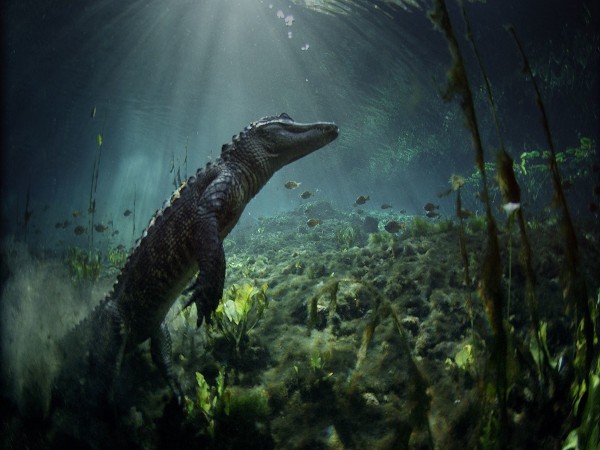 An anonymous writer has described Florida's Everglades as "If the devil ever raised a garden, the Everglades was it", and "one of the unique regions of the earth, remote, never wholly known", the writer tells of 'their vast glittering openness... the racing free saltness and sweetness of their massive winds, under the dazzling blue heights of space, and the 'miracle of the light...over the green and brown expanse of saw grass and of water, shining and slow-moving below.

The Native Americans of southern Florida, the Seminoles, called the Everglades Pa-Hay-Okee, or 'grassy water'. Much of the area is flat, low-lying and waterlogged, a prairie of saw grass (tooth-edged sedge) that grows up to 12ft (4m) high. But there are also trees - dense subtropical forests and dark cypress swamps that give the feeling a dinosaur might still be lurking in their silent, secret depths. The largest of the many creatures that dwell here, however, are alligators and crocodiles, panthers, black bears, river otters and white-tailed deer. Since 1947 part of the area has been a national park.

The heart of the Everglades is a shallow river some 100 miles (160km) long and about half as wide, dotted with low-lying islands, or hammocks. The river's source is Lake Okeechobee, which is less than knee-deep but about 720sq miles (1865sq km) in extent. At the height of the June-October rainy season, as much as 12m (300mm) of rain can fall in a day, and the lake overflow (controlled by dykes) feeds the river. Other springs and streams top up the river, too, and its limestone bed tilts gently down to Florida Bay at the tip of the peninsula.


The profuse greenery of the hammocks include trees such as live oak (an evergreen), mahogany, cocoplum, cabbage palm and gumbo limbo (a type of pine). The bark of the gumbo limbo is red and peeling, like sunburnt skin, earning it the nickname of 'tourist tree. When the saw grass disappears beneath the floods, or when drought dries up the river, these islands are refuges for many animals. The area has also been a refuge for people.

Until the early 1800s, neither the 16th-century Spanish explorers nor the early American settlers had ventured far into the Everglades. Native Americans lived there in thatched houses on raised platforms. They were hunter-gatherers and also planted gardens on the hammocks, a name derived from their word for garden place. The Seminole Indian Wars began about 1817 when settlers from Europe began to encroach on the area.

In 1835 the US government tried to get the Seminoles to move to Oklahoma which sparked off the Second Seminole War. Under the leadership of Osceola, amy fought a guerilla war in the swamps and marshes. But in 1837 Osceola was imprisoned when he went with other chiefs to parley under a flag of truce. He died a year later and resistance faded.

The saw-grass prairies teem with life. On one sedge blade, you may see a bright green frog, on another what looks like a large black seed pod that breaks open to reveal a cluster of grasshoppers. Tropical zebra Butterflies frequent the hammocks in summer, and the sparkling waters are alive with fish, tadpoles and molluscs such as snails the size of golf balls.

The abundant water life makes the Everglades one of the world's, as more settlers came in, thousands of birds were killed for their feathers, but in 1905 a law was passed protecting non-game birds in the region. More than 350 species of bird now live in these marshes or visit them regularly, including roseate spoonbills, spindly-legged fishers such as herons, snowy egrets, white ibises, and the cormorant like anhinga, or snakebird.

Lurking alligators up to 16ft (5m) long eat everything from snails to deer. But in the dry season, they also provide life-saving drinks for other thirsty animals when they dig themselves water holes by thrashing with their heads and tails.

On its western flank, the river passes the Big Cypress Swamp, which borders the Gulf of Mexico and covers an area about half the size of Jamaica. Bald cypress trees rise tall from the water. Sticking up around them are their 'knees' - clusters of small stumps that grow from the roots. They are thought to be how the tree roots take in oxygen. The wooded ridge of Long Pine Key, east of the river, is all that remains of a palm and pine forest.

As the river crawls southwards, the sea comes to meet it, as if impatient with its dwindling pace. Together they make a singular brew of saltwater and freshwater. Red mangroves thrive in the saltwater because their roots rise above the ooze, so can take in air. Their interlocking roots form a water-level barrier that traps so much silt, flotsam and jetsam that it forms new islands.

Fish, terrapins, dolphins and young sharks seek these sultry waters and shelter among the mangrove roots. Olive-green American crocodiles, which have longer, narrower snouts than alligators, live here, too, but all you are likely to see is a shadow in the water. This is now their sole habitat in the USA.

Turn Of The Tide

More graceful shapes glide through the seas flanking the Florida peninsula, and some find their way into the mangrove swamps of Whitewater Bay. They are manatees, or sea cows, around 10ft (3m) long and weighing nearly half a ton. The bustling water traffic around the coast has been the death of many sea cows, and many more bear scars from motorboat propellers. Only about 3000 manatees are left in Florida, and protection schemes are underway.

Not only the manatees bear the scars of civilisation. In the early 1900s, the settlers discovered that the layers of dead saw grass, known as muck, made excellent compost, and irrigating and draining began. Now nearly a quarter of the Everglades is farmland, and canals divert and control the water. This disturbs the delicately balanced natural rhythms of water and wildlife. But the tide of destruction is turning and Lake Okeechobee, poisoned by agricultural pollution, is being cleaned up.