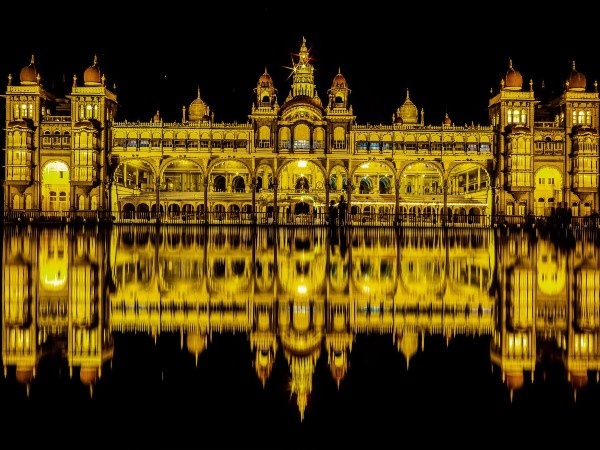 Dussehra in Mysore (Mysore Dasara) commemorates the victory of the goddess Chamundeshwari ( a warlike incarnation of Durga) over the buffalo-headed demon Mahishasura who ruled Mysore and symbolizes the triumph of good over evil. The days leading up to the festival are dedicated to prayer and fasting to Chamundeshwari, and the nights to feasting, song and dance. It is celebrated in many places and is also known as Navaratri, the Festival of Nine Nights. But the festival is most magnificent in Mysore, whose name traditionally comes from Mahisura - the place where the demon was slain by Chamundeshwari.

An attractive city of wide avenues lined with Raj-era buildings and lively narrow lanes (the market is one of India's most colourful), Mysore is known for fine silks, incense and sandalwood products, and for its fantastically elaborate Palace.

This, an Indo-Saracenic complex of Sumptuous rooms full of mirrors, stained glass, gliding, mosaics and carving, was built for the Maharajas of Mysore State - the Wodeyars - respected rulers who still play an important part in their city's ceremonial life. Chamundeshwari is the family deity, and Dusshera begins with their visit to her temple on Chamundi Hill.

During the festival, Mysore enjoys a programme of events, from food and craft fairs to dancing and wrestling. By night, musicians perform in front of the Palace which, along with other public buildings, is brilliantly illuminated.

On Vijayadashami, the tenth day of the festival, a dazzling procession has all the pomp and pageantry of the age of the Maharajas. The image of the goddess Chamundeshwari carried in a golden palanquin on a caparisoned elephant, leads a glittering array of camels, cavalry, dancers, liveried retainers, garlanded idols and brass bands. A glorious torch-lit parade and fireworks bring events to a close.

Around 1,000 steps lead to the top of Chamundi hills, where the towering temple of Sri Chamundeshwari stands. Outside the temple is a lively polychrome statue of the demon brandishing a sword in one hand and a long snake in the other. Halfway up the hill, the huge, monolithic statue of Nandi, Shiva's bull is visited by many pilgrims.