Nativeplanet
»
Travel guide
»Travel To The Dussehra Capital Of India; Why Should We Visit Kolkata During Durga Puja?

Travel To The Dussehra Capital Of India; Why Should We Visit Kolkata During Durga Puja? 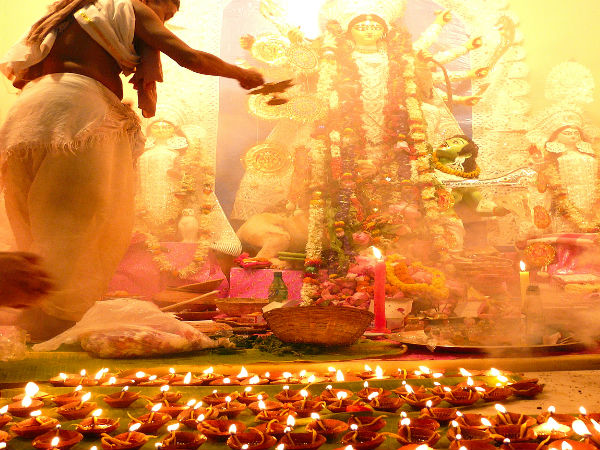 It's that time of the year again when Good prevails over the Evil! Let's travel to the Dussehra capital of India, Kolkata in West Bengal, where Dussehra is celebrated in all its splendour. Durga Puja in Kolkata is considered to be the mother of all celebrations and the city lights up to its full glory during these days.

Durga Puja in Kolkata coincides with the last six days of Dussehra and the all lit up Kolkata live up to its pseudonym of 'City of Joy' during this time. Kolkata doesn't sleep during these days; Music, dance, colours, culture and foods pervade the streets of Kolkata!

Overcrowded streets, huge decorated pandals, delicious cuisine, delightful music and dance, opulent culture and magnificent lighting characterise the Durga Puja in Kolkata. Indeed Durga Puja is to Kolkata what Ganesh Chaturthi is to Pune and Mumbai. Let's see the important features of the famous Dussehra Mela in India which is undoubtedly one of the best Dussehra celebrations in India.

Pandals are the most prominent feature of Durga Puja in Kolkata. Kolkata hosts more than 3000 major Durga Puja pandals which display outstanding creativity. They begin to pop up 3-4 months prior to the Puja and showcase different themes. Some of the famous pandals are in Kumurtuli Park, Suruchi Sangha, Jodhpur Park, College Square and Bagbazaar.

Bengalis are known for their rich heritage and culture which could be seen in profusion everywhere. Music and dance fill the air! Bengali women, wearing traditional tant sarees and red vermilion bindis on the forehead, flaunts the tradition in an exquisite style!

The city gets lit up literally during the Durga Puja in Kolkata. The streets and pandals exhibit magnificent lightings. The lightings are displayed based on a theme which could be the current affairs, mythology or social messages.

Bengalis are known for their love for food. While the rest of the country follows a strict vegetarian diet during the festival, Non- veg dishes galore the streets of Kolkata. The mouth-watering street food in Kolkata is very famous and this is where you need to be if you are fed up of the Navratri veg eatings. Bengali sweets are irresistible for anyone and don't forget to eat your hearts out at the sweet shops of Kolkata.

The last day procession is also a grand affair during the Durga Puja in Kolkata. Travel to this 'Land of Joy' and witness one of the best Dussehra celebrations in India.

Have you been to Kolkata during Dusshera and Durgapuja? Let us know about your experience, leave us comments below and tell us all about it.

Read about the other famous Dussehra Mela in India

Comments
Read more about: travel kolkata navratri durgapuja dusshera west bengal india
Other articles published on Sep 28, 2016
We use cookies to ensure that we give you the best experience on our website. This includes cookies from third party social media websites and ad networks. Such third party cookies may track your use on Nativeplanet sites for better rendering. Our partners use cookies to ensure we show you advertising that is relevant to you. If you continue without changing your settings, we'll assume that you are happy to receive all cookies on Nativeplanet website. However, you can change your cookie settings at any time. Learn more
Change Settings Continue