Nativeplanet
»
Travel guide
»Durga Puja In Kolkata In 2021: A Celebration Beyond Comparison

Durga Puja In Kolkata In 2021: A Celebration Beyond Comparison 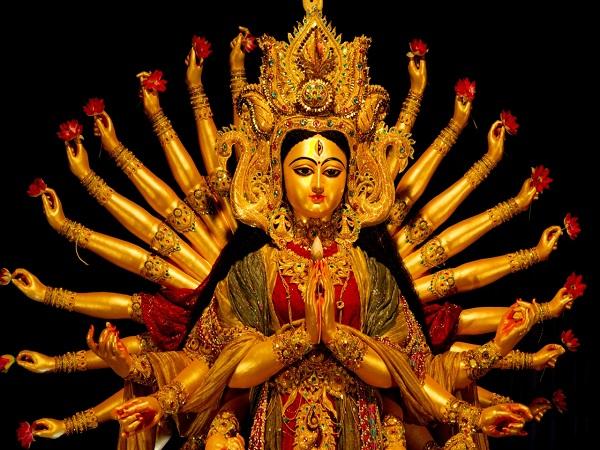 Durga Puja is one of the biggest festivals in India. It is celebrated across India with pomp and granduer. However, in Kolkata, commemorated in honor of Goddess Durga, Durga Puja is celebrated in a traditional Bengali way. This year, Durga Puja celebration begins on 11th October and will go on till 15th October. But in most places, in around Kolkata, the procession start as early as on Mahalaya and marks the end on 15th October with Visarjan of the idols of Goddess Durga. However, it is from the sixth day until the ninth day, the pandals with idols of Goddess Durga are open to tourist and locals.

If you are to visit Kolkata this Durga Puja 2021, you are in for a treat. Many popular features of Kolkata's Durga puja will leave you awestruck. The city transforms into a land of carnival and people from all walks of life step out on the streets with eagerness and excitement to be a part of the grand spectacle.

The name Durga in Sanskrit means ' the impenetrable.' According to the mythology, Goddess Durga transcended onto earth with the collective energy of gods, to kill the Demon Mahishasura. Mahishasura, who was blessed not to be defeated by any man or god, was finally destroyed by divine intervention. She is synonymous with divine feminine power.

The Procession to Bring in the Deity

The Ritual of Pran Pratishta

It is a custom of conjuring the spirit of the Goddess in the idol. This ritual takes places on the seventh day, in the early part of the day. A handful of banana leaves called 'Kola Bou' is washed and adorned with a red-flanked sari. Consequently, using them in the parade by placing it close to the idol. Prayers and puja then mark the start of the trail and continue for the remaining days of the festival. You can witness plenty of cultural activities that occur as a segment of the celebrations. Individuals meet up to dance, sing, and perform musicals.

The Last Day of the Durga Puja

The last day of the Durga Puja celebration is called Vijayadashami; on this day, Goddess Durga triumphed over the Demon and re-established the parity on earth. On Dashami, the idol is carried off for Visarjan. Excited tourists and local assemble in considerable numbers to join the parade to the ghats, where it is submerged in water. Ladies, particularly wedded, start the ceremony by first applying red sindoor or vermillion powder on the Goddess and then to another. It is said to be a personification of marriage and fertility. The dousing of the idol is similar to the immersion of the Ganesha idol during Ganesh Chaturti. Babu Ghat is one of the well-known spots for submersion situated close to Eden Garden.

Pandals To Visit During Durga Puja

Be it the legends of Goddess Durga or from Hindu epic writings, the flawlessly decked pandals accentuate a theme, making it a prime tourist attractions in Kolkata during Navaratri. These days, some pandals are themed on a social, traditional, and cultural cause to spread awareness. Pandals can be viewed up close in the morning as it would remain uncrowded. However, the brilliantly lit pandals in many hues are quite a sight in the nights.

1. Bagbazar: Located in North Kolkata, alongside the stream this uniquely themed Pandal destination has a history of 100 years and highlights on Traditional ceremonies.

2. Kumartuli Park: It was established in 1995 close to Bagbazar and well known for astute themes, and well-made idols.

3. College Square: Set up in 1948 adjacent to a lake in Central Kolkata (off MG street), it's the illumination, and spiritual beauty is all the rage in the town.

4. Suruchi Sangha: Famous for portraying different cultures of India through its work of art and establishments, even the idols are depicted accordingly. It is 50 years of age and situated in New Alipore, South Kolkata.

5. Bose Pukur Sitala Mandir: it is known for winning numerous awards, and acclaimed for showcasing rural Bengal through themes, idols, and work of art. It is situated in Bose Pukar Kasba in the south of the city and is an unquestionably a must-visit.

6. Jodhpur Park: Another famous pandal, this one has a wide range of themes and surprises with a novel touch every year. It is situated close Jadavpur Thana in South Kolkata.

Kolkata boasts authentic local cuisine; hence, food is a noteworthy feature of the Kolkata Durga Puja celebration. Sure enough, in a ceremony this big, you will undoubtedly relish the most flavorful and unfathomable assortment of Bengali food. From tidbits and sweet dishes that only Kolkata is well known for; to the Kolkata Durga Puja exceptional themed Bhog meals that have a little bit of everything.

This grand event of Durga Puja showcases the beautiful culture of the Bengalis in India. The nights during Kolkata Durga Puja witness the boulevards jampacked with tens and thousands of people, both local and tourist. Many come to see the vast flawlessly enlivened idols of Goddess Durga, to offer their prayers. After paying their homage, people indulge in authentic local food at various stalls and food avenues, partaking in the breathtaking festivals to respect the victory of Goddess Durga over evil.