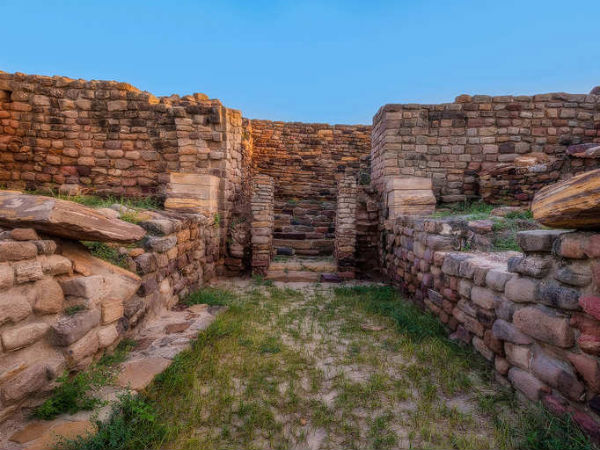 Most of us have read about Indus Valley Civilisation in our school days. Even if you didn't like the history, the Indus Valley Civilization must have created some excitement. Truly, it is one of the most interesting places to be found in North-West of India.

Yes, in this present article let us go to one of the major cities in the Indus Valley Civilization. This Harappan City is believed to be one of the prominent centres during that age. Dholavira is the excavated site in Kutch that calls for our attention.

Dholavira archaeological site is located on a small island called Khadir Bet Island in Kutch. Interestingly, Khadir is just a monsoon island. This land gets surrounded by sea in the monsoons and later only white sand remains for the rest of the year.

Dholavira is part of Kutch Desert Wildlife Sanctuary and is said to be one among the top 5 cities of Harappan Civilization.

What to Explore in Dholavira?

There is a lot to explore and be amazed about these ruins. It is advisable to go with a guide so that you will understand the importance of this place. Otherwise, you might see it as a ruined place and might even get bored.

First, you have to visit a small museum situated near to this ancient site. This museum gives information on the city planning and its features. Do you want to gain some knowledge about History? Then it will certainly happen after your visit to Dholavira museum. Then proceed to explore the Harappan city!

According to the archaeological records, Dholavira was known for excellent water storage system and town planning. Hence, the big water reservoirs are a big attraction. In one of the recent excavations, a 5000- year water reservoir was excavated here. This is said to be the biggest water tank when compared with baths of all Harappan Cities.

A large signboard with the inscription of Harappan language awaits here. Although, the language is still not deciphered, it shows the linguistic knowledge of Indus Valley Civilization.

One major aspect about Dholavira is that it was the prime city for making seals. Several seals with Harappan inscriptions and animal figures have been found here along with several workshops of seal making.

The city was also known for its excellent water-management system and that shows the architectural brilliance of people in bronze-age.

Unlike, other cities like Mohenjo-Daro, the buildings in Dholavira were constructed using stone. Other sites have brick architecture.

Even burial grounds have been found but no human skeletons are found during excavation. Other than the architecture, many terracotta vessels, pots, bronze hammer, metal jewellery, etc. can be found in this place.

The quaint yet a charming Dholavira gives us a glimpse of an ancient civilisation which showed all the signs of progressiveness.

We, in the modern world, think that science is at its best now. Just a look at these archaeological sites that have remained for thousands of years and makes us think otherwise.

So, don't miss out on this ancient city on your visit to Kutch in Gujarat!

How to Reach Dholavira

Dholavira is around 220km from Bhuj. It is best to hire a cab or a private vehicle to reach Dholavira.

You can also enjoy the rural vistas of Kutch. Explore the village around Dholavira without a miss.