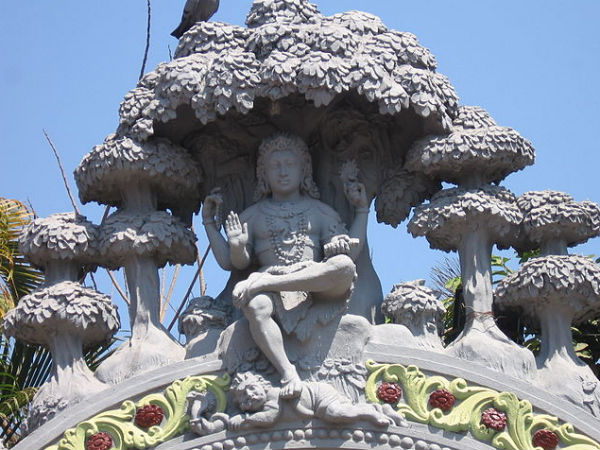 Dharmasthala holds a great importance among several religious places in Dakshina Kannada, Karnataka. 800-years old history of this temple town is interesting to hear. A unique culture exists in this town which stands as a grand example of multi-culturalism in India. Dharmasthala is popular for Dharmasthala Manjunatha Temple but curiously it is not just a Hindu religious site.

Once there was a Jain couple named Birmanna Pergade and his wife Ammu Ballalathi. Birmanna Pergade was the local chieftain of the village Kuduma. This couple were known for being charitable and pious. Hence, the Dharma Daivas (Gods) came in this chieftains dreams and told him to establish a shrine at his house Nelayadi Beedu.

So, Birmanna Pergade vacated his house and made it a shrine for Dharma Daivas. Later, when some priests were performing rituals in this shrine, they suggested him to install a Shiva Linga near to this shrine. Upon their request, a person name Annappa Swamy was ordered to bring a Shiva Linga. Next day he brought a Shiva Linga from a place called Kadri near Mangalore. This Shiva Linga was installed and a temple was built around it. This is the famous Sri Manjunatha Swamy Temple in Dharmasthala.

Dharmasthala is unique for three different reasons. First, it is a Shaivite Temple but managed by the family of Jains. Sri Dr. D Veerendra Hegde, is the present Dharmadhikari whose family has been managing this pious temple for generations. In fact, this family is the descendents of Birmanna Pergade who took the pious duty of turning it into a temple town.

Another interesting aspect is that the temple priests belong to Madhva Community. Though it is a Shaivite temple, the priests here are Vaishnavas. The story behind this tradition goes back to the 16th century. The then Dharmadhikari Sri Devaraja Heggade invited Sri Vadhiraja Swamy of Udupi. However, the Vadhiraja Swamy refused to accept Bhiksha (food offering) as the diety was not consecrated according to vedic tradition. So, Sri Devaraja Heggade requested Sri Vadhiraja Swamy to re-install the temple deity according to the Vedic traditions. Since then Madhva priests are devoted to perform the daily worship in Dharmasthala Temple.

Dharmasthala is not just a Hindu religious site but also a Jain pilgrimage center. The temple of Chandranatha (Sri Chandranatha Basadi) is located near to the temple. This shrine has been there for centuries. Hence, this temple town is also one of the important Jain religious places in Karnataka.

Another Temple in Dharmasthala

The Sri Kshethra Dharmasthala has turned into an important place in Karnataka. Not just as a religious place but also as place known for charity and service. In fact, it is because of the huge contribution of Heggade family that Dharmasthala has gained more importance.

Generations of Heggade Family has managed this temple and have brought in various changes to this temple town. Among all other Dharmadhikaris, the contribution of the present Pattadhikari Sri Dr. D. Veerendra Hegade's strong efforts has not only given a modern outlook to the temple town but has also helped several people in the surrounding regions.

Today around 10,000 people visit Dharmasthala on a daily basis. It is also one of the places which gives decent accommodations for all the visitors. There is also a dinning hall called as 'Annapoorna' which offers free food to all the devotees of the temple.

Therefore, Dharmasthala Manjunatha Temple is one of the top temples in Karnataka. And the temple town is a great example of religious tolerance which has been maintained for centuries.

Dharmasthala is located in Dakshina Kannada district. It is also within 100km to Sringeri and Horanadu.

A visit to this pious town is a must in Karnataka.

Comments
Read more about: religious travel temples shiva temples karnataka
Other articles published on Sep 20, 2016
We use cookies to ensure that we give you the best experience on our website. This includes cookies from third party social media websites and ad networks. Such third party cookies may track your use on Nativeplanet sites for better rendering. Our partners use cookies to ensure we show you advertising that is relevant to you. If you continue without changing your settings, we'll assume that you are happy to receive all cookies on Nativeplanet website. However, you can change your cookie settings at any time. Learn more
Change Settings Continue