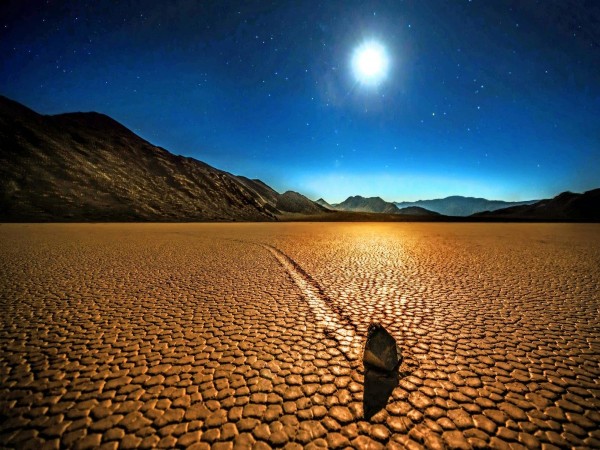 Deadman pass, Dry Bone Canyon, Funeral Mountains - the very place names of California's Death Valley are sinister. This is North America's hottest, driest area - a place of baking summer heat where a whole year can pass without a drop of rain.

On summer days, the thermometer routinely rises to 43°C (110°F), and temperatures reaching more than 49°C (120°F) have been recorded daily for just over six weeks. When the rain comes, it is often in sudden downpours that flood the heat-baked ground with torrents of water and mud.

Death Valley claims another record at its lowest point, 282ft (86m) below sea level, it is the lowest place on the North American continent. It formed when huge blocks of land sank downwards along fault lines, while adjacent blocks rose to form the neighbouring mountains. This deep trench with its very low-lying floor acts as a sheltered sun trap within an area that is already hot and dry, and in the rain shadow of the Sierra Nevada mountains.

Everywhere there is evidence that the climate was once much wetter. Canyons cut into the valley walls were created by torrents of running water, and there are great fans of sediment that was washed down from the surrounding peaks. Salt deposits on the valley floor were left behind after lakes evaporated, and at the Devil's Golf Course salt has been eroded by wind and rain into jagged spires.

Yet despite the hostile surroundings. Death Valley is far from devoid of life. Bighorn sheep can live on very little water, sidewinder snakes move in 'jumps' that keep their bodies clear of the hot ground, and the stems and leaves of the rare, white-flowered rocklady are covered with hairs that insulate them from the desiccating wind. Even the few brackish streams and ponds support life - tiny pupfish that can cope with salty water.

A party of gold prospectors bound for California visited Death Valley by accident in 1849, and their experiences gave the place its name. They left the rail, hoping to find a shortcut, but instead found themselves struggling down a barren, almost waterless valley which had no obvious way out. One woman wrote later of how her little boys 'bore up bravely, they could barely talk, so dry and swollen were their lips and tongues.

Two of the group found a route out of the valley and returned to guide their companions safely. As they left, one of them delivered the parting shot, 'Goodbye, Death Valley.

A myth grew up about the horror of Death Valley. Greatly embellished stories were told of wagon trains of people dying in torments of thirst, yet prospectors were still drawn there by rumours of gold and silver.

In the boom and bust days that followed, fortunes were made, but more often lost, in short-lived mining ventures. Settlements mushroomed and were deserted a few years later when the mines ran out - Skidoo, the site of a very profitable gold mine, and 500 inhabitants at its peak in the early 1900s. It had a telephone link with Rhyolite, just outside the valley, which in 1906 had a swimming pool, an opera house and 56 saloons. By 1911 Rhyolite had been abandoned and slowly decayed into a ghost town.

Though gold mining had little long-term success in Death Valley, the same was not true of borax. During the 1880s, the 'white gold, one of whose many uses was in pottery glazes, was scrapped from the valley floor. Mule teams hauled it to the railhead, 165 miles (265km) away from the harsh, yet austerely beautiful Death Valley.