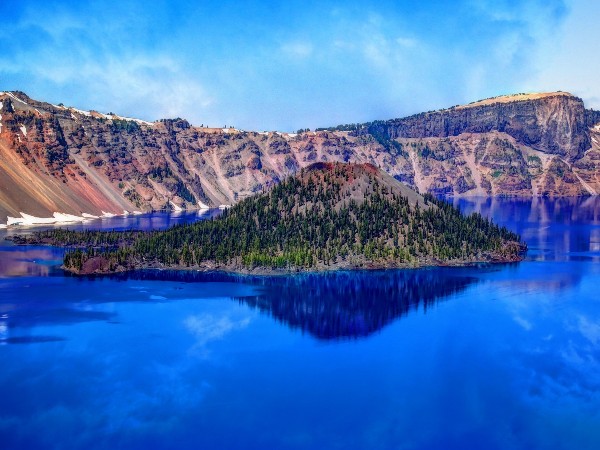 In 1870, a Kansas schoolboy read a short article - in the newspaper wrapped around his lunch - about a lake that lay high in the Oregon mountains, encircled by sheer walls and containing an extinct volcano. The article triggered William Gladstone Steel's lifelong interest in Crater Lake. He campaigned tirelessly to protect it from the changes that man's activities could bring, and his work bore fruit in 1902 when Crater Lake became the United States' fifth national park.

The lake that Steel worked so hard to protect lies in the vast hole left after the top of Mount Mazama collapsed during violent volcanic eruptions 7000 years ago. The lake, 5 miles (8km) across, is surrounded by multicoloured cliffs which rise steeply from the water to form a jagged rim that in places is almost 2000ft (600m) high twice the height of the Eiffel Tower.

Two small but contrasting islands punctuate the surface of the lake. One known as Wizard Island is an almost perfect volcanic cone. The other, named Phantom Ship, sail forth from the south side of the lake, with masts, sails and rigging formed by pinnacles of rock and spiky conifer trees.

Crater Lake lies high in the Cascade Range, 6176ft (1882m) above sea level. Winters are long and hard - snowfalls totalling 50ft (15m) a year starting in September and last until July and the lake broods beneath swathes of fog.

As the snow melts in spring, Nature emerges from its winter retreat. Wildflowers bring colour to the slopes, black bears wake from their winter sleep, and mule deer and moose migrate to the meadowland to graze.

The native American peoples who lived in the area - the Klamaths and the earlier Maklaks - held Crater Lake in awe. To the Klamaths, it was a place of unnerving magic, to be visited only by healers and holy men who went there to refresh their powers.

In Malak legend, Mount Mazama was the site of a battle between the chief of World Above, Skell, and Llao, the Chief of the World Below, who lived on the mountain with his monstrous disciples. During the battle, massive rocks hurtled across the sky, fire swept through forests and the land trembled until Llao lay dead and the mountain top was in ruins. Skell cast Llao's quartered body into the massive pit that had formed in the ruined mountain, and the tears of his disciples filled it to form Crater Lake. Llao's head remained where it fell and was later Wizard Island by European settlers.

The legend's battle scene resembles actual events. Before its eruption in about 5000 BC, Mount Mazama was a many-scored volcano that could have a main-coned volcano that could have been 12,000ft (3600m) high. Then the main central vent and a host of subsidiary vents started to blast out huge quantities of incandescent ash that swept down the volcano's flanks. The eruptions increased in power, and eventually, so much rock had been lost that the centre of the volcano began to collapse, leaving the huge caldera 4000ft (1200m) deep that now contains Crater Lake. Mazama's final paroxysm, as it continued to fall in on itself, discharged ash that fell over a vast area from Nevada to Saskatchewan, more than 750 miles (1200km) away.

Over thousands of years water settled in the hollow from a lake 1932ft (589m) deep - the United States's deepest. No streams flow into Crater Lake and none flow out, and water lost through seepage and evaporation is neatly balanced by snow and rainfall.

After the major eruption, volcanic activity continued on a diminished scale and volcanic cones, including Wizard Island, formed on the lake bed. Phantom Ship's jagged spikes, however, are much older, and are weathered from a vertical sheet of hard rock filling a fissure that fed a must earlier volcanic vent.

The area has been inhabited continuously for 12,000 years, there may have been witnesses to Mount Mazama's eruption. Tools and sandals predating it have been found near Crater Lake, buried beneath a layer of ash - a product of the cataclysmic events that created this treasure of extraordinary natural beauty.