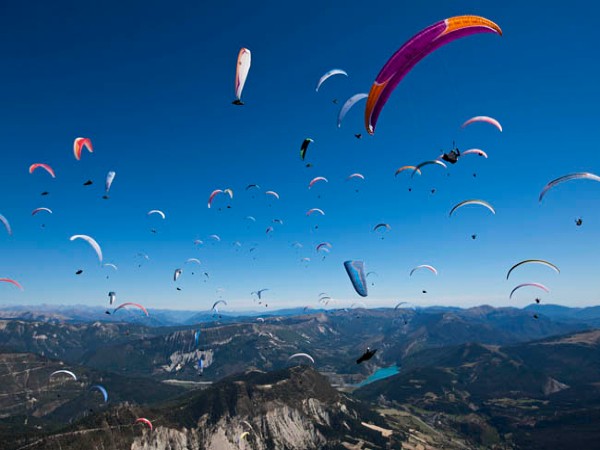 They fly through the air with the greatest of ease - in all sorts of weird and wonderful costumes. Yes, the highlight of the four-day Coupe Icare (Icarus Cup) is undoubtedly the series of daring, exciting and hilarious Masquerade Flights that feature fancy-dressed paraglider and hang-glider pilots competing for handsome prizes in the Icarnaval contest.

The competitors jump from the high cliff above the verdant valley wearing colourful costumes or attires.

The event was started in 1973 as an offbeat tourist attraction by the commune of St-Hilaire, situated high in the Rhine-Alpes of southwest France, but now the Icarus festival has become a major annual occasion that has far outgrown its humble beginnings.

A legion of enthusiasts for flight sports now ascend to this splendidly appropriate venue every autumn, not only to enjoy watching those spectacular Masquerade Flights but also to attend the International Free Flight Film Festival and browse through a wide selection of specialist merchandise on offer at the Icare Expo air sports trade fair.

Every year sees the addition of more related activities such as kite flying, boomerang throwing, model aircraft and birds-of-grey shows. Hot-air balloons are there too, with an international meet seeing dozens of these colourful behemoths taking to the skies. If it flies in an amusing or entertaining context, expect to find it here.

Where is the event held:

Icarus is not the most reassuring title for a festival of human flight - in Greek mythology, Icarus fell to his death when attempting to escape from exile on Crete using artificial wings...sadly flying too close to the sun, at which point his wax and feather wings melted with disastrous consequences.