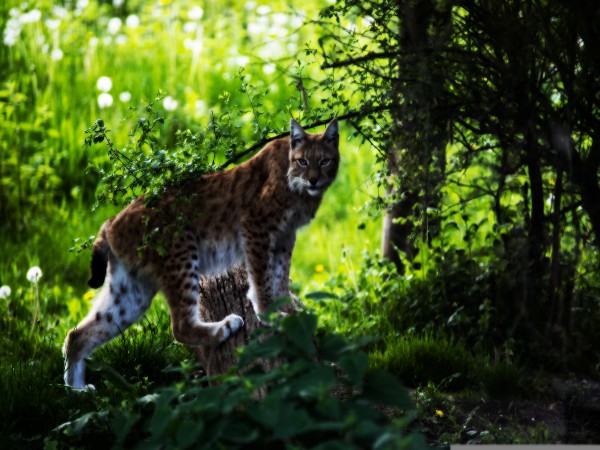 Marshes crisscrossed by countless river channels, scrubland dense with rockroses, and dunes of glistening white lie side by side in a remarkably varied tract of wilderness in southern Spain. Together with pine woods, lakes and cork oak groves, they make up the Coto Donana National Park, an area of more than 190sq miles (500sq km) at the mouth of the Guadalquivir River.

Coto Donana is one of Europe's most important wildlife havens. It is the home of rare and endangered species such as the Spanish imperial eagle and the lynx, and the temporary home of many migratory birds, especially wildfowl from Scandinavia and Russia.

Donana begins where the Atlantic Ocean laps a beach of golden sands. Behind the beach rise, dunes of soft white sand pitted with depressions called Carrales that fill with water in spring. They look for all the world like Saharan oases, except that pine trees have taken the place of waving palms.

Beyond the dunes id Coto Donana proper - woods, lakes and scrubland that was once the hunting ground of the dukes of Medina Sidonia and Spanish kings. The name Donana comes from Dona Ana, the wife of the seventh duke. This duke made a notable, though reluctant, contribution to history as the commander of the Spanish Armada, a task he had tried to avoid by telling his king that he suffered from sea sickness.

The painter Francisco Goya also visited Donana as the guest of his patron, and perhaps lover, the Dutchess of Alba, who owned the estate at the end of the 18th century. The Duchess was the subject of two of Goya's finest portraits, and may also have been the model for his painting The Naked Maja.

In Donana's stone-pine woodlands, imperial eagles nest in the trees' strong branches. Each pair of Imperial eagles needs its hunting territory of about 19sq miles (50sq km). There is an old story that it fills other birds with such terror that they commit suicide - a flamingo seeing an eagle approaching becomes so panic-stricken that it folds its wings and plunges to its death.

Among the pine woods are lakes of several colours. Charco del Toro has black water, and the water of Santa Olalla is emerald green. Shellfish that live there are food for the lordly flamingos and contain a substance that gives the birds' plumage its pink colour.

In Coto Donana's scrubland, a carpet of yellow-flowered rockroses gives way in places to dense jungles of heather and brambles. Colonies of spoonbills, herons and storks nest in groves of cork oaks, and lynxes take refuge in the hollow boles of the older trees.

Beyond the woods and scrubland lie Las Marismas, 'the marshes', a seemingly endless swamp where birds congregate in vast numbers. The entire area is flooded from autumn to early summer, forming one of Europe's largest lakes. The marsh is a stopover for more than 200 species of bird which pass over the nearby Strait of Gibraltor while migrating between Africa and northern Europe. This narrow stretch of water is particularly useful to heavy birds such as storks. Their soaring flight needs the rising currents of warm air that occur on land.

Then, under the fierce summer sun, the wetlands dry out until large tracts become concrete-hard mud. Migrant birds move on, and vultures feed on animals that have died of thirst.

The wildlife of Coto Donana is under threat. The waters of the marsh are being siphoned off for irrigation and industry, and they could dry up, Migrant birds filling the sky over endless marshes may well become a thing of the past.