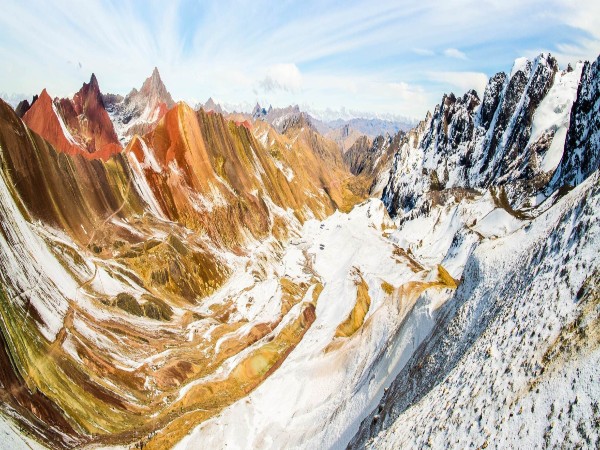 High in the Peruvian Andes lies Colca Canyon, described in the Guinness Book of Records as the world's deepest gorge. Yet few people have even heard of it. And despite its status as a world record holder, and its stunning granduer, mere handfuls of travellers venture into these mountains to look at the seemingly bottomless chasm that the Colca River has incised into the Earth's surface.

Other extraordinary discoveries can be made in this corner of Peru. Extinct volcanoes lie strewn along a valley, boulders bear mysterious etchings, and tales are told of people with pointed heads. On their travels, the few visitors follow dusty roads across treeless grasslands and stony deserts where the sun blazes down and cross mountains more than 13,000ft (4000m) high with icy torrents tumbling down the sides.

Cut off from the outside world, this part of the Andes keeps its secrets to itself. Those who eventually reach Colca Canyon are rewarded with the muddiest in the wet season. At the top - a whole 2 miles (3.2km) above the river - are lofty mountains whose snowy white heads are frequently lost in clouds.

Yet for centuries people have eked living in these difficult mountains, terracing the lower slopes for crops and keeping llamas. Ask them how they came to live here, and they will tell you that their ancestors moved here from a snow-covered conical volcano called Collguata. They called themselves Collaguas after their sacred mountains, and even shaped themselves in its image, wearing pointed hats and binding their children's heads to make them conical - until Spanish conquerors banned the practice in the 1570s.

Over the mountains from Colca Canyon, conical hills taper upfront a valley floor to terminate in more or less circular craters. This eerie lunar landscape is the Valley of the Volcanoes, and the 86 cones, some of them approaching 1000ft (300m) high, are extinct volcanoes. In some parts of the 40-mile (64km) long valley, the cones rise from fields; elsewhere, swirls of solidified black lava lap at their feet.

Between the Valley of the Volcanoes and the Pacific Ocean, thousands of white boulders lie scattered over Toro Muerto, a hot and sandy gully. Many of the boulders have been engraved with geometric shapes, sun discs, snakes and llamas, and with people wearing what look like space helmets. The boulders were probably left after some volcanic upheaval, but who engraved them remains a mystery. Some have speculated that the helmeted figures represent spacemen. With no other remains of past peoples to go with the engravings, more down-to-earth explanations of their origins are scanty.

One suggestion is that migrating tribes passed by more than a thousand years ago on their way from the mountains to the coast, and stopped to make their marks.

Sprouting from the bare slopes of this harsh land are balls of 4ft (1.2m) long spikes. They are puya plants, whose sword-like leaves radiate from a thick trunk and are edged with curved hooks that fend off browsing animals. The shelter is so scarce here that small birds brave the barbs and build nests among the puyas leaves, although the number of corpses shows how many homes turn into death traps. Some biologists speculate that the puya 'eats' the birds by absorbing chemicals leaching out of the corpses.

Bird corpses, and those of animals, are the food of the mighty Andean condor. Yet this vulture, with a wingspan of 10 1/2ft (3.2m), is less invincible than it looks. The food supply in the mountains is meagre and unreliable, and because condors normally breed only when there is a glut of food, their future survival is constantly under threat.

Devastating storms every five or more years provide abundant carrion - they kill weak animals and bring insects that cause disease. Only then do the condors by their single eggs. Yet if any living creature knows all the secrets of these mountains it is this magnificent bird, which casts a shadow on the slopes as it glides above with such effortless ease.