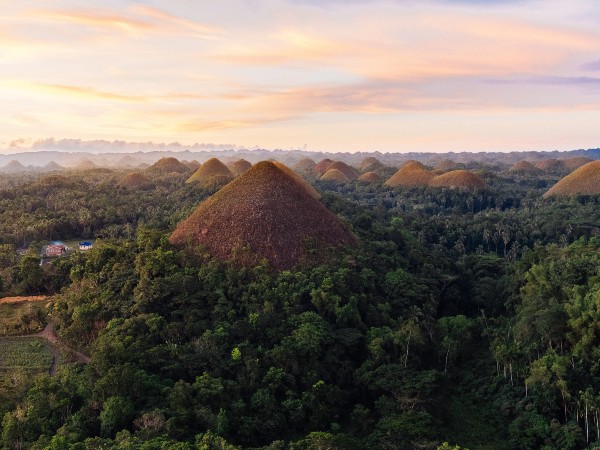 At first glance, the Chocolate Hills of the Philippine island of Bohol look artificial - the result of prodigious human effort, rather than the work of Nature. Wild grasses cloak the hills, and during the February to May dry season, they become so parched that the hills turn the chocolate colour that has earned them their name. Then torrential tropical rains arrive, reviving the grasses and turning the landscape verdant.

Bohol is one of the Visayas islands that lie at the heart of the Philippines. The first formal treaty was made between the islanders and the Spanish crown.

A local chief, Datu Sikatuna, entered into a treaty of friendship with Miguel Lopez de Legazpi, the representative of Philip II of Spain from whom the country takes its name. The men sealed the treaty by drinking wine mixed with their blood, which they had dripped into the cup from cuts on their wrists. Thus the treaty is known as the 'Blood Compact'

But to the Filipinos of today Bohol is first and foremost the land of the Chocolate Hills. There are 1268 steep-sided, regularly shaped mounds standing cheek by jowl on a plateau in the centre of Bohol and rising to anything from 100 to 300ft (30-100m) high.

No one knows how these extraordinary limestone hills came into being, but it is possible that are simply the product of millions of years of wealth-erring by the rain. The Chocolate Hills are unusual in that there are apparently none of the cave systems that normally develop in this type of limestone area.

The folklore of the Boholanos provides other explanations of the Chocolate Hills' origins. In one tale, the hills were the result of a battle between two angry giants who hurled rocks at each other for days on end, but to little effect.

Weary of fighting, they resolved their differences and departed the island as bosom friends - leaving the rocks exactly where they had fallen. In a further tale of tragedy, the giant Arogo was passionately in love with a mortal called Aloya and decided to kidnap her. But she rejected the giant's advances, went into a decline and died, and the Chocolate Hills are the teardrops of the grief-stricken giant.