Celebrate Christmas At Some Of The Most Beautiful Churches Of India 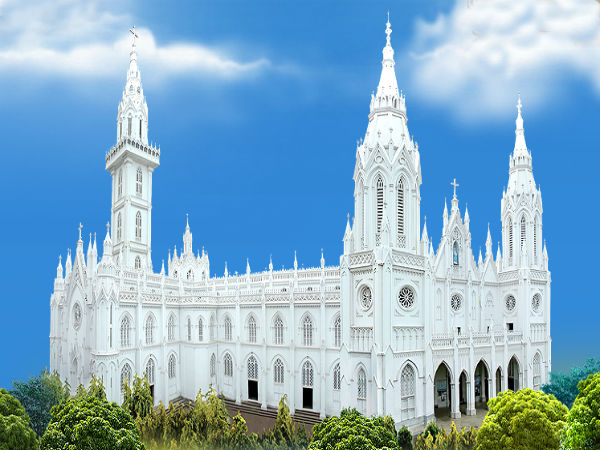 Christianity is the third largest religion in India with around 28 million followers. The history of the religion and the many churches goes back in time to 52 AD, when St Thomas, the apostle, landed in the port town of Muziris, which happens to be the present day Kodungallur, in Kerala. With his arrival, a new faith was born in the country.

St Thomas is believed to have established a number of churches in Kerala and inspired many others to construct these places of worship across the country and spread the message of the Gospel. Colonisation was a significant time period in the construction of churches by the Dutch, Portuguese, French and the British, who not only built churches across the land, but also brought in new architectural influences to them, which eventually resulted in some of the most beautiful structures.

Located in the city of Chennai, the church was initially built by the Portuguese in the 16th century over the tomb of St Thomas and was rebuilt in the year 1893 by the British.

Our Lady Of Dolours Basilica, Thrissur

Also known as Puthanpalli, Our Lady of Dolours Basilica is the third tallest church in Asia and is well known for its Gothic style of architecture.

Our Lady Of The Immaculate Conception Church, Goa

Considered as the first church to be built in Goa, the structure offers a striking description of the religious conditions of the time and wealth which were available to the churches. The interiors of the structure are relatively very simple in comparison to the others built around the same time.

Flanked by two altars, which would easily grab the attention of the visitors, the altar on the left is dedicated to Jesus Christ on a cross and the other one is dedicated Our Lady of the Rosary. Both the statues are fine examples of the Portuguese period which are done in heavily gilded, deeply carved ornamentation and remain compact.

Basilica Of Our Lady Of Good Health, Velankanni

One amongst the most well-known churches in South India is the Basilica of Our Lady of Good Health at Velankanni. The history of the church can be traced back to the 16th century and is attributed to three miracles at the sites around where the Basilica is constructed.

The three miracles are the apparition of Mary and Infant Jesus to a shepherd boy; the second is the curing of a poor buttermilk vendor; the last is the rescue of Portuguese sailors from a violent sea storm. The shrine is also known as Lourdes of the East and celebrates a nine-day feast, which attracts nearly million pilgrims from near and far.

The Medak Cathedral is one the largest churches and one amongst the most beautiful church buildings in the country. The church was consecrated on the 25th of December 1924 and was originally built by the British Wesleyan Methodists.

The structure measures 100 ft in width and 200 ft in length and is constructed in the Gothic Revival style of architecture. The church has the capacity of accommodating nearly 5000 people at a time.

Located in Old Goa, the Basilica Of Bom Jesus is a famous church which houses the mortal remains of St Francis Xavier. The church showcases one of the best examples of the Baroque style of architecture in the country and has been declared as a UNESCO World Heritage Site.

The construction of this beautiful church began in the year 1594 and was completed in 1605, making it one of the oldest churches in Goa as well as in India.

The St. Paul Cathedral at Kolkata is noted for its Gothic style of architecture and is said to be the largest cathedral in the city of joy. It is also the first to be built in the overseas territory of the British Empire.

The cathedral was built to replace the St John's Church, which had become too small to accommodate Kolkata's growing European community and was constructed in the Indo-Gothic style of architecture to meet the weather conditions of India.

Comments
Read more about: travel india christmas architecture monuments heritage sites church goa kerala kolkata
Other articles published on Dec 19, 2017
We use cookies to ensure that we give you the best experience on our website. This includes cookies from third party social media websites and ad networks. Such third party cookies may track your use on Nativeplanet sites for better rendering. Our partners use cookies to ensure we show you advertising that is relevant to you. If you continue without changing your settings, we'll assume that you are happy to receive all cookies on Nativeplanet website. However, you can change your cookie settings at any time. Learn more
Change Settings Continue