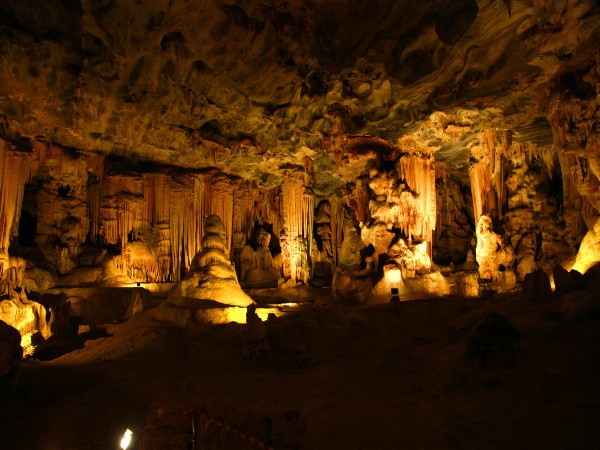 One of Nature's most spectacular creations lies beneath South Africa's Swartberg Range: a cavernous world of limestone formation, lakes, deep, pits and interconnecting tunnels. This fairyland of glittering crystal shapes forms one of the world's most varied underground cave sequences - Cango Caves.

The bizarre limestone formations of the Cango Caves were built up, millimetre by millimetre, over more than 150,000 years, by the dripping of water through fissures filled with calcite - a crystallised form of chalk.

The wandering route through the caves leads through chamber after chamber with names such as Throne Room, Crystal Forest and Rainbow Room that attempt to describe their most distinctive formations. The Bridal Chamber has a collection of Stalagmites that resemble a four-poster bed.

Nature's work was revealed in 1879 when a cattle herdsman stumbled into the entrance of the caves. The man's employer, a farmer named Van Zyl, accompanied by eight slaves, entered the caves with flickering torches to discover a great chamber 320ft (100m0 long and 50ft (15m) high. Within it, a stalagmite, now known as Cleopatra's Needle, soared 30ft (9m) into the air.

In the 1950s, experts started to investigate draughts that signalled the existence of further caves beyond an apparent dead end. In 1972 two professional cave guides broke through a small crevice to discover more wonders. The journey of discovery did not end there, and yet more chambers have been found, one of which is more than 980ft (300m) long. The most recently discovered caves have taken explorers 800 metres underground.