Bryce Canyon: Abode To A Series Of Natural Rock Amphitheatres 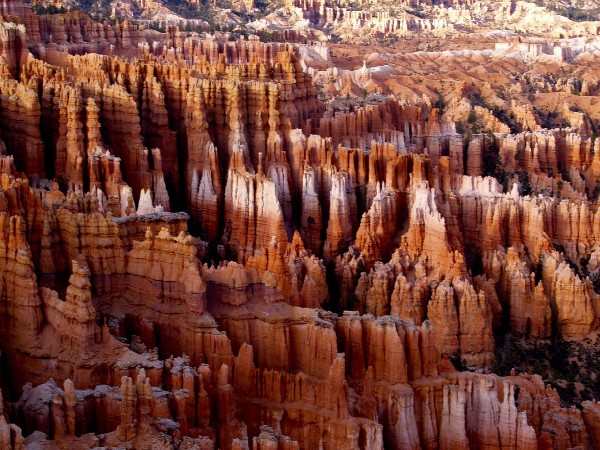 An architectural fantasy of sandstone and limestone the spires and pinnacles of Bryce Canyon rise from its shadowed depths like the disinterred ruins of an ancient city. When an American surveyor named T.C. Bailey first set eyes on the beautiful and mysterious stone sculptures in 1876, he was enchanted - he thought it was 'the wildest and most wonderful scene that the eyes of man ever beheld'.

The Paiute people who lived in the area for centuries were, however, less romantic about the place, calling it 'Red rocks standing up like men in a bowl-shaped canyon. They believed the rocks to be men who had been turned to stone by the wrath of the gods.

Bailey described the 'thousands of red, white, purple, and vermilion coloured rocks, of all sizes, resembling sentinels on the walls of castles, monks and priests in their robes, attendants, cathedrals and congregations'. Modern names were given to some of the rock formations, such as 'Wall of Windows, and 'Thor's Hammer. 'Tower Bridge', 'Hat Shop' and 'Atomic Cloud', indicate their strangeness and diversity.

Bryce canyon is not truly a canyon but a series of natural rock amphitheatres some 500ft (150m) deep, its red-brown rocks range through shades of rust red, salmon pink, lemon and almost white - due to the weathering of different mineral blends, mostly iron oxides, in the rock layers. Blues and purples indicate manganese oxide.

Changing light brings ever-changing colours and new perspectives to the surreal and silent stones. Dawn and dust are the best times to view them, for at these times the sun's slanting rays reflect richer hues and cast darker shadows that Accenture the rock shapes. In winter, the stones are flecked with white where snow gathers in odd corners, and in shady places lingers until late spring.

Early pioneers found travelling through Bryce Canyon difficult because of the debris underfoot and the maze of ravines. The heat and glare from the bare rocks added to their discomfort and the thin air - the altitude is up to 9000ft (2750m) - soon sapped their strength.

This is why such areas were known as badlands - or 'bad lands to cross. Ebenezer Bryce, a 19th-century pioneer who settled near the Paria River, north of the canyon, described the badlands as a hell of a place to lose a cow!'

Bryce, from whom the canyon gets its name. Was a Scottish-born settler who joined the Mormon community of Salt Lake City as a carpenter and sawmill operator. He moved south to set up the Paria River homestead with his wife and ten children in the 1860s, hoping that the warmer climate would be good for his wife's health, Bryce sold out in 1880, after failing in an attempt to irrigate the valley by diverting water from the River Sevier, a project that was successfully completed 12 years later.

The rocks are grooved horizontally, each groove marking the edge of one of the layers of rock-building sediment, for 60 million years ago Bryce Canyon was at the bottom of a lake covering much of Utah. The layer varies according to the material washed in and the life present in the water. Gradually the grains were glued together by the chemical cement from layers of limestone and sandstone of different strengths.

By the time a rock layer about 2000ft (600m) thick built up some 15 million years ago, earth movements pushed the lake bed high above the water to build the Pansaugunt Plateau, which is the youngest and highest of a series of Plateaus known as the Grand Stairway that descends south-wards to the rim of the famous Arizona Grand Canyon.

The highest point of the Paunsaugunt Plateau is its southern tip, 9600ft (2750m) above sea level. Northwards it drops some 2000ft (600m) in height. The rock amphitheatres of Bryce Canyon stretch for 21 miles (34km) along the plateau's eastern edge, carved out from its cliffs.

When has shaped this wild, bizarre landscape, and is still doing so? Although the terrain is dry in summer, winter snowfall is heavy, and in spring meltwater seeps into the rocks by day and freezes by night. Expanding ice breaks up the surface rock, leaving it o be swept away by the meltwater torrents and summer storms.

The floodwaters carve through the softer parts of the layered limestone, creating gullies, arches and gullies, arches and tunnels, and scouring the canyon ever deeper. As the process continues, the canyon rim is recloned to be receding at the rate of about 12in (300mm) every 50-65 years. Trees growing on the rim tell the tale - they are left standing on 'tiptoe', with their roots exposed.