Bora-Bora: Pearl Of The Pacific 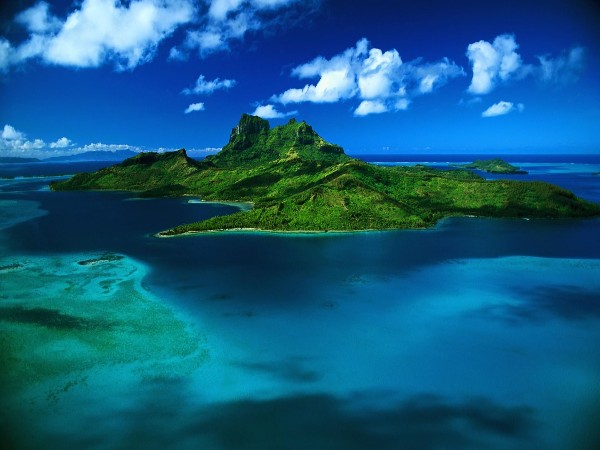 Pearl of the Pacific, but the nearest thing to paradise on earth, the island of dreams - all these names have been given to Bora-Bora. For American author James Michener it was the most beautiful island in the world and the model for his image island of Bali-h'ai, mentioned in Tales of the South Pacific and featured in a song in the Rodgers and Hammerstein musical South Pacific, in 1949.

Bora-Bora is an island of dream-like tranquillity in the heart of French Polynesia, one of the loveliest of the Leeward group of Society Islands. White, glistening beaches, backed by palm groves, viridian hills and profusions of bright hibiscus, stretch beside a crystal clear lagoon. The tropical temperatures, ranging from 24°C (75°F) to 28°C (82°F), are moderated by fresh breezes from easterly trade winds.

There is only one navigable inlet through the ring of coral islands - known as the ring of coral islands - known locally as Motus - so the lagoon it's a natural harbour. As well as the main island, which is about twice the size of Gibraltar, there are two smaller islands, Toopua and Toopuaits - all remnants of an eroded volcanic crater. Two sharp craggy twin peaks dominate Bora-Bora - Mount Pahia, 2165ft (660m) and Mount Otemanu, 2379ft (725m) Polynesians colonised the island about 1100 years ago, and there are several ancient temples. One of them has stone slabs carved with sacred turtles.

Jacob Roggeveen, the Dutch explorer, visited Bora-Bora in 1722, the first European to do so. Captain James Cook, the British explorer and navigator, sighted the island in 1769 and dropped anchor at the harbour entrance in December 1777. Cook recorded the island name as Bola Bola (meaning First Born), but Pora Pora might have been more accurate, as the native Polynesians were unable to pronounce either 'b' or 'I'.

The first European settler was James Connor, a survivor from the wreck of a British whaler, the Matilda, in 1792. He married a Polynesian woman and settled on the southernmost tips, calling it Matilda Point; today it is known as Matira Point. The island became part of French Polynesian in 1895.

Bora-Bora plunged headlong into Western 20th-century ways in 1928-29, with its first American 'invasion' - a film crew making a silent movie called Tabu, the tragic love story of a Tahitian pearl fisherman who transgressed the taboo laws. This was a prelude to the coming of the Americans during World War II when for four years the island was an air and naval base for 6000 men - Tales of the South Pacific is about the experiences of American servicemen in the 1940s.

Italian filmmakers arrived in Bora-Bora in 1979 to shoot Dino De Laurentis's film Hurricane, a remake of a 1930's melodrama.

The wartime airstrip built at Motu Mute is part of the modern airport, from where today's tourists are transported by boat across the lagoon to Vaitape, the main village.

After a day of sun, sand and sparkling water. Bora-Bora's sunset is fiery and short-lived. That amplifies the sighting of the wind in the palm trees and the pounding of the waves on the reef.