Bidar: The City Of Learning 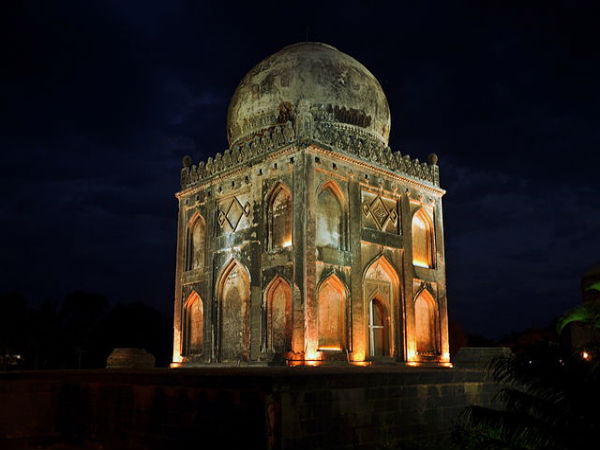 Ready to explore more of the Bahmani Kingdom? If so, all you have to do is hit the road on NH 218 to Humnabad and then proceed to SH 19 which would take you to the city of Bidar. Located at a distance of 114 km from Gulbarga, the present day Bidar was the erstwhile home of Vidura, the wise minister who we learn about in the Mahabharata.

Bidar, in ancient times, was known as Viduranagar, and became the home of the Bahmani kings only in the year 1429, after Ahmed Shah I made it his capital and called it Ahmedabad Bidar. It remained under the control of the Bahmanis until the year 1527 after which it went into the hands of the local chieftains and later on to Aurangzeb and the Nizams.

Most of the monuments here date back to the Bahmani Dynasty, Ahmad Shah I had strengthened the citadel at Bidar upon the foundations of an ancient fort whose origins cannot be traced or are considered to be lost in time.

Also read: Have You Visited These Famous And Stunning Forts Of Karnataka Yet?

The Bidar Fort stands tall on a high bluff with a steep drop. The walls wrap up the fort along a distance of 10 km with strategically placed bastions and towers which offer a breathtaking view. One can look through the graceful, slowly ruined arches of the Diwan-i-Amand and the Diwan-i-Khas or from the top of the Solah Khamba Mosque inside which stands a huge old banyan tree and by its side is the once marvelous Rangeen Mahal.

The Rangeen Mahal was built by King Mahmud Shah Bahmani in the 16th century, it is a graceful complex comprising of cisterns, tanks and underground rooms which was used as an escapade from hot summers. Inside one of the enclosures, one can find carvings which are inlaid with pearls.

There is a museum to its right which is small but still well maintained. The museum was once a bathhouse and now is home to some interesting souvenirs which are collected from earlier Hindu dynasties. One can see how the huge fort locks have withstood the test of time.

But the masterpiece is the magnificent Solah Khamba Mosque nearby. With the ruins of the Tarkash Mahal on one side, this restored mosque is located amidst well-maintained gardens. The mosque gets its name from the 16 pillars at the centre of the prayer hall which were built in the year 1423 and was later restored by Aurangazeb.

As you step out of the mosque you would notice the Diwan-i-Am, do stop and have a look at its huge rooms which have wide arches and overlooks the villages located below.

This structure is located at the heart of Bidar's Old Town and with it stands many grand buildings which showcase the intelligence of Mahmud Gawan. Gawan was a well-known linguist and mathematician who often approached various other scientists, philosophers and other thinkers to build his own religious school.

Built in the year 1472, the structure portrays how a man who originally was a trader from Iran came in and transformed himself into a trusted governor of the Bahmani dynasty. The school is a three-storeyed structure which has a minaret, a mosque, numerous halls and rooms which were used by the students of this organisation.

The Chaubara is another heritage structure which is located at the center of the town. The structure now in ruins, throws light at some parts which show that it might have been a watchtower to the majestic fort.

Nearby to the structure is the Khanquah of Hazrat Nur Samnam. The Khanquah is a Muslim monastery which might have been constructed by the Bahamani rulers as an accommodation facility to the various mystics, seers and religious who were invited to visit Bidar during their times.

Next to the monastery is the Jami Masjid which is protected by a huge barred gate. On the outskirts of the city is a Gurudwara named Jhira Sahib. It is said that Guru Nanak has stayed here for some time during his tour across various places.

Walking through the Udgir Road, one would come across numerous tombs which belong to the monarchs who succeeded the Bahmani rulers. These magnificent structures are magestic and the most beautiful amongst them is the tomb of Qasim Barid. Another important tomb found here is that of Ali Barid Shah who had 68 mistresses from various parts of the world.

Comments
Read more about: travel india monuments karnataka bidar heritage sites road trip weekend getaway
Other articles published on Aug 3, 2017
We use cookies to ensure that we give you the best experience on our website. This includes cookies from third party social media websites and ad networks. Such third party cookies may track your use on Nativeplanet sites for better rendering. Our partners use cookies to ensure we show you advertising that is relevant to you. If you continue without changing your settings, we'll assume that you are happy to receive all cookies on Nativeplanet website. However, you can change your cookie settings at any time. Learn more
Change Settings Continue