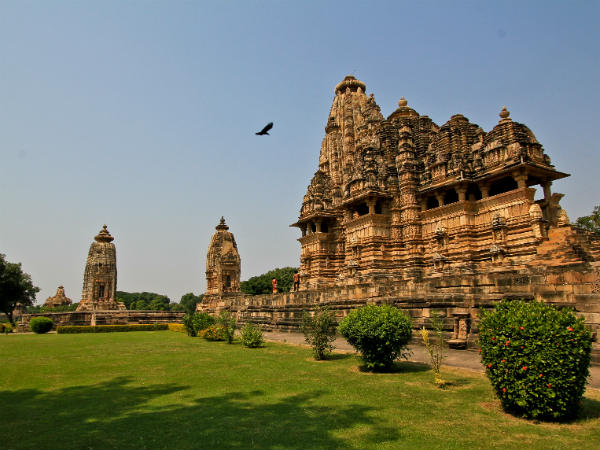 These monuments comprise of several Hindu, numerous Jain and a few Buddhist temples and were built by the rulers of Chandela dynasty as a sign of accepting and respecting other religions and their values. Khajuraho Group of Monuments is a UNESCO World Heritage Site now and is visited by millions of tourists and travellers from all over the world.

The region around Khajuraho experiences an extreme type of climate, therefore, it is a least-preferable spot for seasonal tourists. However, for history lovers and architecture enthusiast, Khajuraho is a year-round destination. If you are looking to avoid the summer heat, then the best time to visit is from October until the end of March.

How To Reach Khajuraho From Bhopal

By Air: You can catch a direct flight to Khajuraho Airport. Once you have reached the airport, you can hire a taxi to its group of monuments, which are located at a distance of about 5 km from the airport.

By Rail: Bhopal is well connected to Khajuraho and other cities by rail and hence, you can catch a direct train from Bhopal railway station to Khajuraho station. It will take you an approximate time of 7 h to reach your destination.

By Road: Khajuraho has a good network of roads and therefore, it can be easily approached by road. It is located at a distance of around 380 km from Bhopal.

You must take route 1 if you are looking to reach Khajuraho within minimum time. Through route 1 you can reach your destination within 8 h, i.e., 1 h lesser in comparison to other routes. You can also explore the towns of Sanchi and Sagar on your way.

On this historical trip to Khajuraho from Bhopal, you must consider Sanchi as your first stopover on account of its beautiful monuments. Sanchi is famous amongst tourists for the Buddhist complex, which is said to have been established during the Mauryan dynasty and houses the Great Sanchi Stupa.

This monumental stupa was used by Buddhist monks as a meditation centre and is considered as one of the largest stone structures in India. So, if you are keen on exploring the ancient beauty of Madhya Pradesh, then you must take a break at Sanchi, which is located 50 km from Bhopal and 330 km from Khajuraho.

Sagar is one of the prominent districts in Madhya Pradesh and is known for its beautiful Jain temples. It is also home to Lakha Banjara Lake which is visited by hundreds of tourists every week on account of its fresh environment and favourable climate.

It has become a famous evening and morning destination for the locals over a period of time. Apart from lake, the major places here include Neminagar Jain Tirth and Pateriaji. It is located at a distance of about 210 km from Khajuraho and 170 km from Bhopal.

Only surviving structure at Khajuraho to be built during the 9th century, Chausath Yogini is the oldest temple in the region. As it is in a dilapidated condition today, you can also explore its ruined walls and open lawns. Most of the sculptures found here are kept in Archaeological Museum.

Apart from the above-given tourist spots, you can also visit other significant temples which form the Khajuraho Group of Monuments. These temples include Lalgaun Mahadev Temple, Varaha Temple, Ghantai Temple, Chitragupta Temple, Matangeshwar Temple, Parshvanatha Temple, Duladeo Temple and Adinath Temple. If you are a nature lover, then you can also avail the opportunity of exploring its surroundings gardens and beautiful lawns.