Bhopal To Chanderi – Explore The Glory Of Ancient Monuments 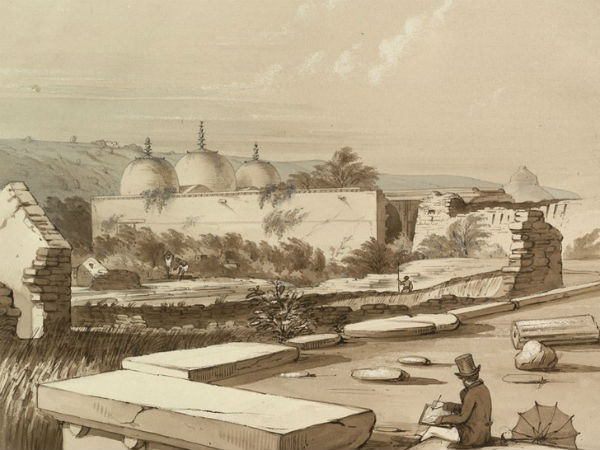 Madhya Pradesh is augmented with several studs in the form of historic cities and ancient sites. These historical places define the culture and history of the state. One such place is Chanderi, which is located in the Ashoknagar district and is known for its ancient monuments.

However, it is also gaining popularity for its natural surroundings which flourish in the form of hills, forests and lakes. Even though the exact history of the town is still unknown, it is believed that Chanderi was founded by the King Shishupal, one of the important characters from the epic Mahabharata.

Today, it is a popular weekend destination for locals and history lovers who love spending time amid legendary lanes from the past. So, if you are looking for a weekend getaway from Bhopal where you can learn about the Indian history and get lost in the charm of nature simultaneously, then you must plan a trip from Bhopal to Chanderi this season.

Chanderi lies in the central part of India and hence, it experiences an extreme type of climate due to which the summers are hot here. However, the beauty of its greenery and the majesty of its past compels every history lovers and photographer to explore it even during the summer season. If you are looking forward to witnessing the grandeur of Chanderi in a cool atmosphere, then the best time to visit is from October until the end of March.

How To Reach Chanderi From Bhopal

By Air: The nearest airport from Chanderi is located in Bhopal at a distance of about 215 km and hence, it is advisable to avail rail or road transport to reach Chanderi from Bhopal.

By Rail: You can catch a direct train to Lalitpur railway station, which is located at a distance of about 40 km. From the station, you can hire a cab to Chanderi. It will take you an approximate time of 5 h to reach your destination from Bhopal.

By Road: If you are looking forward to saving your time, then it is advisable to take a road journey from Bhopal to reach Chanderi as you can reach it within 4 h. While commuting on your own, following is the route which you must follow to reach Chanderi easily and comfortably.

On your way to Chanderi, you can also catch a glimpse of Sanchi and its stunning spots.

Sanchi is located at a distance of about 50 km from Bhopal and 165 km from Chanderi; therefore, it is a perfect place to take a break. Famous for its Buddhist complex dating back to the era of the Mauryan dynasty, Sanchi is recognised as a historical town from ancient India which houses the Great Sanchi Stupa, one of the oldest stone structures in the country and a beautiful masterpiece of ancient architecture. From architraves to arches and patterns to designs, each and every corner of the Great Sanchi Stupa and its surrounding buildings need to be explored.

As Chanderi has been been ruled by several dynasties, you get to explore several monuments from different eras. From the splendours built by the Bundela Rajputs to the buildings constructed by the Malwa Sultans, this historic city hosts numerous spots. Being surrounded by hills, streams and lush vegetation, the region of Chanderi also helps in providing its visitors with an essence of unblemished nature. Following are the must-visit places in Chanderi which you should not ignore exploring.

Chanderi Fort is one of the most recognised monuments in Chanderi and was built by a Muslim ruler of the Malwa region. However, later on, it was conquered by several other kings, ranging from the Bundela Rajputs to the Mewar kings and the Mughals to the Maratha rulers.

Bordering the skyline of the core settlement of Chanderi, this ruined yet beautiful fort is a must-visit place in Chanderi. The main gate of the fort is known as Khuni Darwaza, as it is believed to have been through several wars and battles in which thousands of soldiers and kings were killed.

Kaushak Mahal is another picturesque destination for history lovers and architecture enthusiast. A perfect mix of Indian, Afghani and Islamic architecture, Kaushak Mahal is a treat to savour. Even thoug most of this historic building is in ruins today, it is still a beautiful spot to relax amid nature and history as its green surroundings help you enjoy a cool breeze and a pristine atmosphere.

If you are always keen on exploring historical and architectural beauties, then Bada Mahal Gate is certainly a spot to explore for you. It also hosts a beautiful park in its compound.

Chanderi, in its later era, has also been a major centre in Madhya Pradesh where Jainism flourished for a long period of time. Therefore, it is common to find Jain temples and other religious sites within the boundaries of Chanderi. The major temples here include Shri Choubeesee Bara Mandir, Shri Khandargiri Jain Temple, Thobonji Jain Temple and Chandraprabha Digambar Jain Temple. You can also find a few ancient Jain caves in and around the location of these temples.

Shahzadi Ka Rauza is a beautiful instance of magnificent artistry and was built during the 15th century by a Muslim ruler of the Malwa region. It is said to have been constructed in the loving memory of the king's daughter, who killed herself after the king was not ready to let her marry his army chief.

With historical monuments counted in hundreds, each and every corner of Chanderi narrates stories from the past. Apart from the above-described tourist spots, you can also visit and explore the magnificence of Jama Masjid, Ramnagar Museum and Palace, Kirti Durg, Jageshwari Temple, the tombs of Nizamuddin family and the rock paintings of Nanuan.