Hindu Temples In Sikkim That Will Let Your Experience Divinity 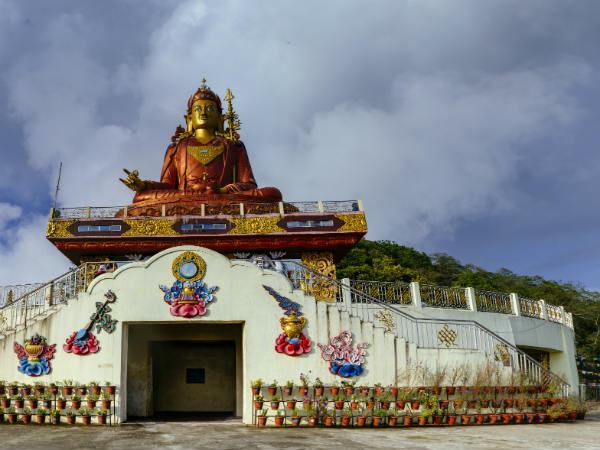 One of the most beautiful states in India, Sikkim is a popular tourist destination and is known for its beautiful hill stations, lush green surroundings and peaceful aura. On account of the presence of several historical places and age-old religious sites, it also attracts history enthusiasts. Hence, it wouldn't be wrong to say that Sikkim is an ultimate destination in India for every kind of traveller. From trekking trails to sky-touching mountains and lush green valleys to charming waterfalls and historical monuments to beautiful temples, it has everything that can charm and amaze you to the core.

How about planning a tour of this gorgeous state this season and exploring the grandeur of its beautiful temples? These temples are known for their peaceful environment and divine atmosphere. Therefore, one can literally feel the essence of godliness within their boundaries. Read on to know more about these temples.

If you are truly a history lover, then you cannot miss visiting and exploring the ancient Thakurbari Temple. It is located in the heart of Gangtok, the capital city of Sikkim, and is said to be one of the oldest temples in the state. As per records, it was established during the period of the Chogyals.

Since its formation, Thakurbari Temple has been a significant site for Hindu devotees. It is also one of the few temples in the state which house all the major Hindu deities. Therefore, it is visited by devotees of all sects. The temple is also noted for its wonderful architecture. So, it is a must-visit site for architecture enthusiasts too.

Locally known as Shiv Mandir, Kirateshwar Mahadev Temple is one of the largest temple complexes in Sikkim and is dedicated to Lord Shiva. As per local legends, the temple is said to be the place where Lord Shiva appeared in front of Arjuna and blessed him with success in the Mahabharata war. It is located in a small town named Legship at a distance of about 107 km from Gangtok.

As it is built on the banks of the river Rangeet, the surroundings of the temple remain peaceful and composed throughout the year. Probably, it is one of those few temples in the state which can literally transport you to a blissful world. Such is the presence of divinity in its atmosphere that it makes for an ideal weekend destination for meditation and introspection.

Dedicated to Lord Hanuman, the god of power and strength, Hanuman Tok is situated in the upper reaches of Gangtok and is one of the most significant Hindu temples in the region. It is under the care of the Indian Army. As per Hindu mythology, the temple is believed to be the site where Lord Hanuman, while flying with the Dronagiri Parbat, rested for a while on his way to save Lord Lakshmana.

Today, the temple is of great religious significance and is visited by hundreds of tourists and locals every year. You can also visit the nearby Ganesh Tok, which houses a small temple dedicated to Lord Ganesha.

If there is any temple in Sikkim which can top the list of the most beautiful temples in the state, then it is certainly Shri Viswa Vinayaka Mandir. Located atop a hill and overlooking the lush green valleys of Sikkim, this gorgeous temple is dedicated to Lord Ganesha and was established in the year 2016.

It houses a 12-feet-tall statue of Lord Ganesha. It is located at Rhenock Rungdung in the East Sikkim district. If you are looking forward to taking a break from the hustle and bustle of cities and experiencing serenity and divinity, then you must plan a tour of Shri Viswa Vinayaka Mandir.

Located at a distance of about 5 km from Namchi, Samdruptse Shiva Temple is located on a beautiful hill named Samdruptse, which is said to be a wish-fulfilling hill. The temple is visited by thousands of Hindu devotees every year and it houses a towering statue of Lord Shiva, which is a prime attraction for several photographers.

The major reason Samdruptse Shiva Temple must be visited by tourists lies in its pristine and peaceful environment. The temple is a perfect place to spend a relaxing weekend.

Comments
Read more about: india travel tourism sikkim temple pilgrimage weekend history hills
Other articles published on Nov 5, 2018
We use cookies to ensure that we give you the best experience on our website. This includes cookies from third party social media websites and ad networks. Such third party cookies may track your use on Nativeplanet sites for better rendering. Our partners use cookies to ensure we show you advertising that is relevant to you. If you continue without changing your settings, we'll assume that you are happy to receive all cookies on Nativeplanet website. However, you can change your cookie settings at any time. Learn more
Change Settings Continue